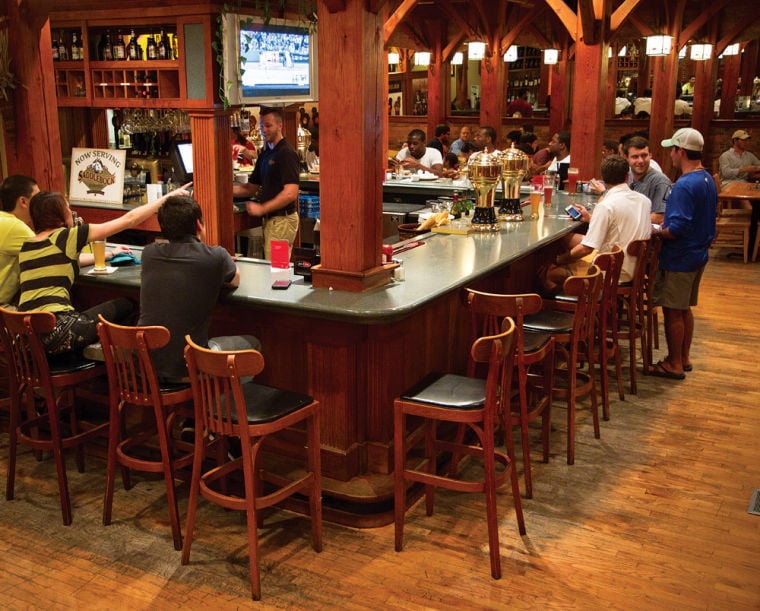 Hog Haus Brewing Company "has a complete bar with domestic and imported beer on tap as well. The Hog Haus sells its own beer-to-go in Growlers (1/2 gallon jars), which is the only place in Fayetteville that sells beer-to-go on Sundays," according to the company website. 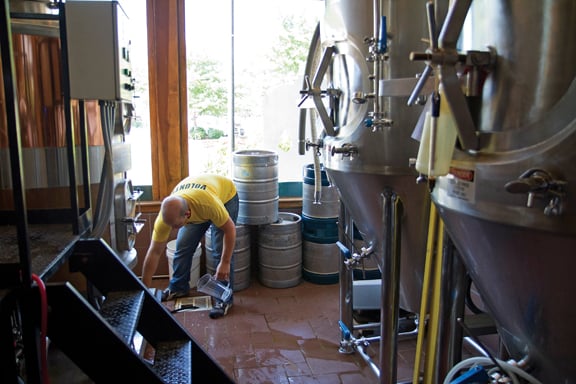 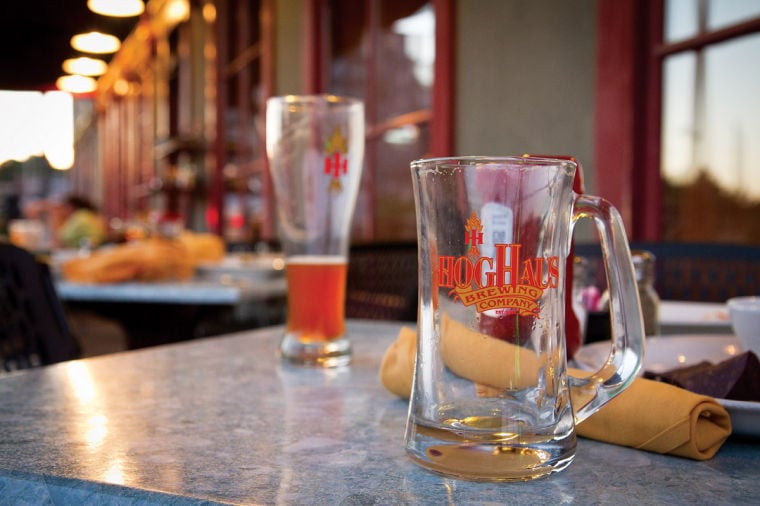 Hog Haus Brewing Company "has a complete bar with domestic and imported beer on tap as well. The Hog Haus sells its own beer-to-go in Growlers (1/2 gallon jars), which is the only place in Fayetteville that sells beer-to-go on Sundays," according to the company website.

As the house stout beer at hit his lips, Sam Clark started beaming.

“Wow. This one’s awesome. It goes down so easy,” Clark said.

On a Saturday in early September, my friends Georgia Carter, Ethan Hunter, Sam Clark and I decided to try a beer at each of the breweries featured on the Fayetteville Ale Trail. The Ale Trail is a recent promotion by the Fayetteville Convention and Visitors Bureau that encourages tourists and townies alike to check out the region’s emergent craft beer scene. It may have been an ambitious plan to visit all seven in one day, but an afternoon spent drinking beer with friends sounded like a great way to spend a lazy Saturday.

To complete the journey, the Visitors Bureau provides passports that are stamped at each stop. Because it requires driving between beers, I offered to drive the group between the seven breweries scattered throughout Fayetteville and Springdale. Visiting all local the breweries took seven hours altogether, with plenty of time conversing between the sips.

, the first stop on the Ale Trail, feels like Fayetteville’s living room. Cheeky posters and knick-knacks hang on the walls of the converted service station at the corner of School Avenue and Fifteenth Street. Light pours in, bathing couches and a pool table in soft light. Hunter and Clark chose the house stout, which received glowing reviews.

“Before, I always thought of a stout as just a Guinness, but this is so smooth,” Hunter said.

Tanglewood’s other house beer, an English bitter, was too much of a beer drinker’s beer for the group. The waitress tipped us off about Bacon and Kegs every Monday, where the kitchen cooks up pounds and pounds of bacon for the happy hour crowd. The bacon is free, but they stop cooking at 7:00 p.m.

West Mountain Brewing Company, located next to Tiny Tim’s Pizza on the square, is Fayetteville’s own little Cheers. The dark wood bar, the lively conversation and the smell of hot pizza from Tim’s next door make West Mountain seem like your neighborhood watering hole, even it’s your first visit.

As for the beer, Clark ordered another stout and Hunter ordered the double IPA. Both beers went over well, but the double IPA was the most dynamic.

“The taste changes so much from the time it hits your tongue to the aftertaste,” Carter said.

After West Mountain, we headed to longtime Dickson Street staple Hog Haus feels more like a restaurant than a bar, but the house beers were all popular. Between the four of us, we ordered a java stout, a strawberry blonde and an IPA. The java stout hit like a double shot of espresso in a Guinness, and was my personal favorite of the day.

on Zion Road was the toniest stop on the Ale Trail. The beautiful wood-panelled bar inside was originally from a pub in Ireland, and the open plan for the restaurant is spacious. Recently opened, Apple Blossom seems like a hangout for Fayetteville’s young professionals more than its students. The beer list was welcoming, however.

Clark ordered the Maverick Roggenbier, while Carter and Hunter both ordered the Fayette-wiesse. The roggenbier was Clark’s favorite, but the Fayette-wiesse was too bitter for the group. Apple Blossom’s brewmasters produce high-quality, traditional European beers that may be out of range for those without a developed beer palate.

We then ventured through the countryside to , located in a barn east of Springdale on the White River. We all agreed that Saddlebock’s setting was unparalleled, with a huge vista of bluffs over the river and rolling pastureland. The barn has wrap-around decks, making it a wonderful place to spend an afternoon with friends.

Walking in Saddlebock, the brewery smell hits you more than any of the other stops. The heavy, bready smell that’s halfway between a frat house and a bakery sends everyone into a friendly, laid-back mood. The group ordered two blueberry tart beers, one helles beer and one dirty blonde beer. We went on the sunny deck, and started chatting away, beer in hand.

The blueberry tart tasted like a pie in a cup, and was Carter’s pick for best local beer. The helles was bitter at first taste, but was pleasingly bitter and smooth. The dirty blonde, which is available on tap throughout northwest Arkansas, was familiar, but somehow tasted better at the Saddlebock barn.

may be poised for the most commercial success. Core has the largest operation capacity of any northwest Arkansas brewery, but the tap room is by no means all business. There are dartboards on the wall, an expansive patio, and, when we walked in, an intense game of Jenga that had the whole room on edge.

Clark ordered an oatmeal stout and Hunter ordered an American Wheat. We took the beers and sat in a room with couches, a chalkboard wall and a big-screen television showing college football games.

, our last stop on the Ale Trail, was the perfect place to end the day. Barley, the brewery Weimaraner greeted us upon entry. I ordered a grapefruit ginger beer, Hunter ordered a wit, and Clark ordered a pale ale. Nomad’s Natural Plate, a local mediterranean food truck, was set up outside.

As we sat at the tap room bar, drinking our beers and eating our gyros, we collected our thoughts on the afternoon’s beers and breweries.