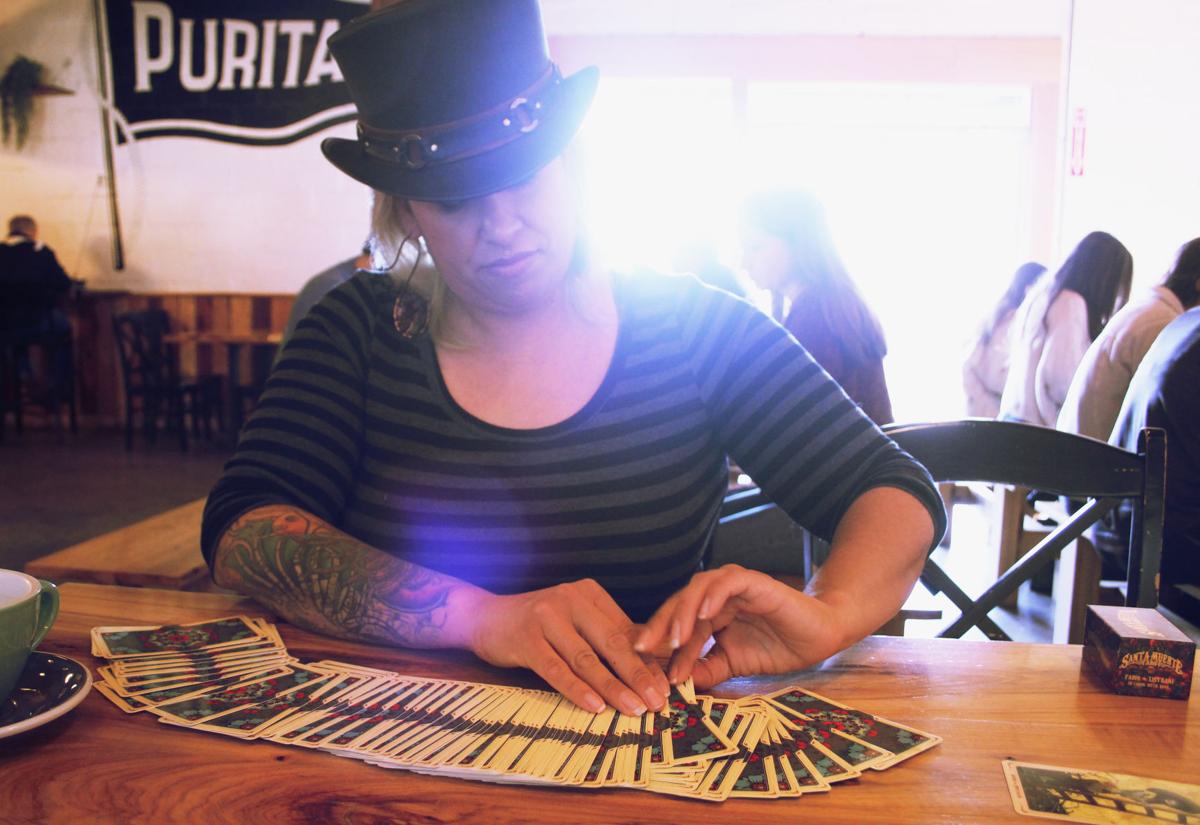 Juliana Jessing draws cards for a spread Nov. 8 using cards from the Santa Muerte Tarot Deck: Book of the Dead. Although she started off with a Rider-Waite deck, Jessing has started resonating more with the Santa Muerte deck, which hits home for her culturally, she said. 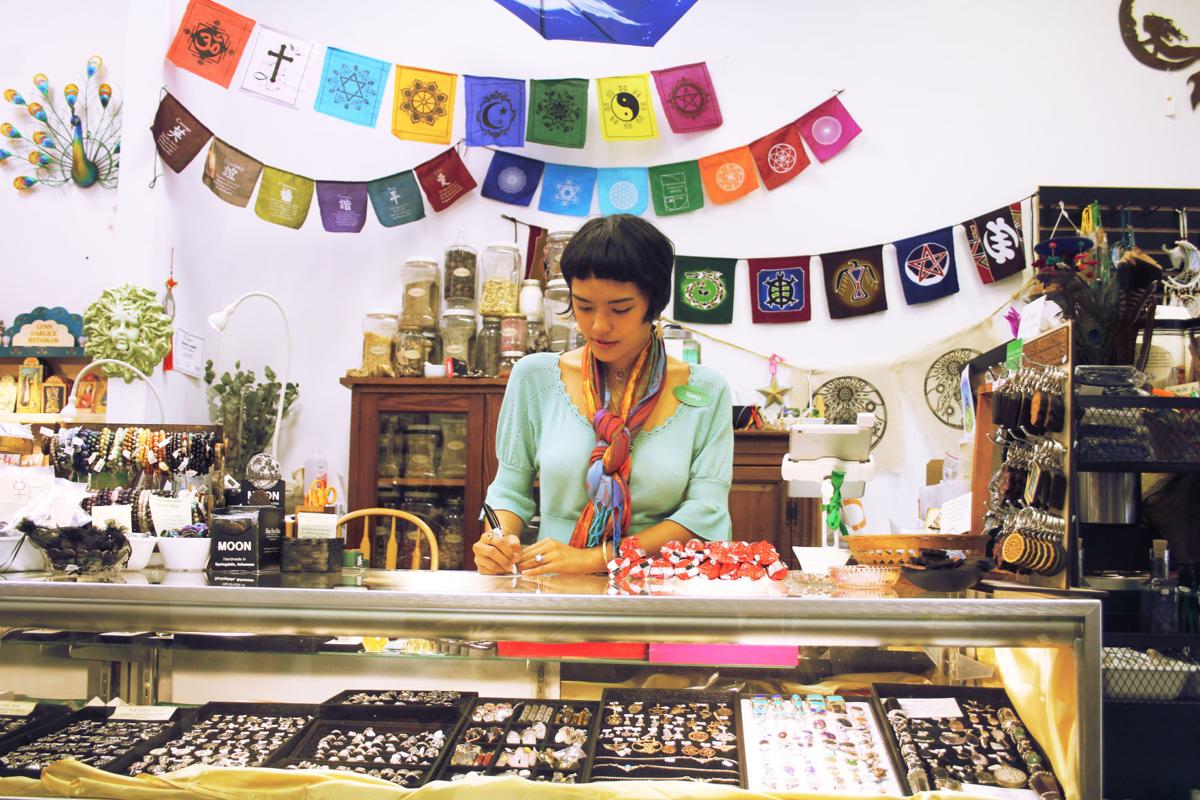 Terra Falani marks up merchandise before The Four of Wands opens Nov. 6. Symbols adorn the banners, flags and tapestries stationed around the shop, with origins spanning the globe. 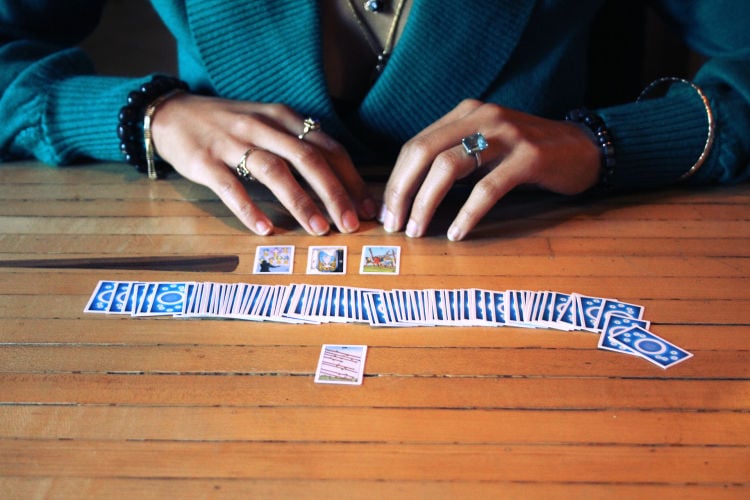 Terra Falani completes her reading, using cards from a mini Rider-Waite deck purchased at The Four of Wands.

When Juliana Jessing moved to Fayetteville, she was scared there would be no place for her, a Mexican-Scandinavian “bruja,” or witch in Spanish. But just a few months after settling in, The Four of Wands, a metaphysical and spiritual goods shop, opened, and Jessing found what she was looking for.

Jessing, 37, moved from California to Fayetteville last year, leaving behind her large community of Latino witches to raise her child in Fayetteville, where The Four of Wands opened in September.

“On my way driving here, I thought to myself, ‘How am I going to function without a spiritual supply store? Because I don’t think there’s one in Fayetteville,’” Jessing said. “It was kind of like my hopes had been answered – that it was just waiting for me to get there.”

Jessing practices “brujeria,” witchcraft in Spanish, and is one of an assortment of pagans, witches, psychics and earth-based practitioners who have found community and employment at The Four of Wands.

Witches, practitioners of natural magic who are often also followers of a pagan religion, are on the rise in the U.S., with 340,000 practitioners in 2008, according to surveys compiled by Trinity College.

Despite the growing number of practitioners, Jessing said it was hard to leave California behind, where she had a community and an assortment of spiritual goods shops to choose from.

When Jessing met Melissa Hall, 51, the owner of The Four of Wands, she offered to sell her unique brew of Florida Water, which is used primarily for divination and cleansing, to the shop.

From there, Jessing was employed and began working in the back of the store as an energy worker and psychic reader. While she is not monotheistic, Jessing believes in a higher power that guides her spiritual practices, she said.

Hall, who now identifies as a practitioner of an earth-based tradition, a shopkeeper and a witch, opened the store on Sept. 9, 2018. She realized the need for a store like The Four of Wands after her childhood favorite store, Passages, closed in 2011.

Although Jessing said the vast majority of her interactions with customers at The Four of Wands are positive, she thinks the stigma around witchcraft is too great to ever really go away.

“It’s not because people aren’t changing their minds, because they are,” Jessing said. “It’s that deep, deep scar of the past that sucks.”

Despite the stigma, the community Jessing has found at The Four of Wands, which she called her “extended magical family,” is something she’s never had before.

Every year, Jessing hosts a gathering for Samhain — a Gaelic festival from Oct. 31-Nov. 1 that marks the end of the harvest and the beginning of winter, which Jessing calls the ‘Witch’s New Year.’ For this year’s celebration, Jessing invited 13 women, some of whom work at The Four of Wands, for a ritual and cocktail party.

“I haven’t felt that normal in years,” Jessing said. “No anxiety, no feeling like I was being judged just for walking in the room. I’m at my happiest when I’m surrounded by those people.”

A Tarot card reader from the shop, Charlotte Winchester, pulled a card for the night – the ten of wands – which she interpreted as “a fresh start,” Jessing said.

For Terra Falani, 26, who landed in Fayetteville after a lifetime of moving, with long stints in Japan and California, The Four of Wands was her fresh start.

Falani characterizes her life by seasons and had felt stuck in winter – in loneliness and low energy – until she found the shop, where she, like Jessing, now practices Reiki healing — a Japanese technique to reduce stress by using gentle touch and motion to balance someone’s energy — and Tarot card reading, among other practices, she said.

“I feel like this is kind of like my springtime of my life where I’ve come out, made community myself for the first time in my life through the shop,” Falani said. “Without my parents, without my partner, without anybody else, I was like, ‘I’m going to join this community, and I want this job.’”

Though she does not identify as anything but herself, Falani draws inspiration from her Catholic upbringing in her Reiki healing by imagining herself as a cross pulsating with energy during the session, she said.

“Jesus, he was a healer. He was a rogue warrior honestly,” Falani said. “He was against the institution, he was doing his own thing and getting his own following. So I kind of draw inspiration from that story of Jesus for sure.”

While Falani does not consider herself a psychic but tends toward identifying as an empath – a person who can pick up on individuals’ mental or emotional states – Jessing identifies as “unfortunately, a psychic,” she said.

“Unfortunately, being a full-on psychic, which I’ve actually finally accepted over the past couple of years, is you know what’s coming,” Jessing said. You know what happened to them. You don’t just have this anxious feeling because you walked in a room. You walked in a room and there’s a person and you zero in on them. You can almost have a flash of something that’s happened to them.”

Since Jessing was a child, she has seen, heard and felt spirits around her, sometimes interacting with them and sometimes even calling them forth in her sessions. During her sessions, she draws from her indigenous background with the use of certain tools, like drums, feathers, smoke and rattles to “put the client more in harmony with the vibration of the earth,” she said.

At the ends of her sessions, Jessing usually draws Tarot cards with the client.

Jessing’s Tarot cards and other tools are not accepted by most members of her family and have caused problems with friends, leading to her feeling isolated for much of her life.

“I felt so alone as soon as I got here,” Jessing said.

But when The Four of Wands opened, Jessing went in as soon as she could, excited to find like-minded practitioners and to offer her Florida Water recipe.

Falani came excited to learn more about Tarot cards and to find a community.

“I’ve gained confidence, you know, and I think a big part of that is being able to bounce things off of people,” Falani said. “And people are so nice here.”

Falani and Jessing are two of a rotation of workers, including other psychic readers and healers, who have found refuge and community at The Four of Wands, where members of the community are also invited to attend Tarot salons, guides meditations and rituals, with dates listed on the store´s website.