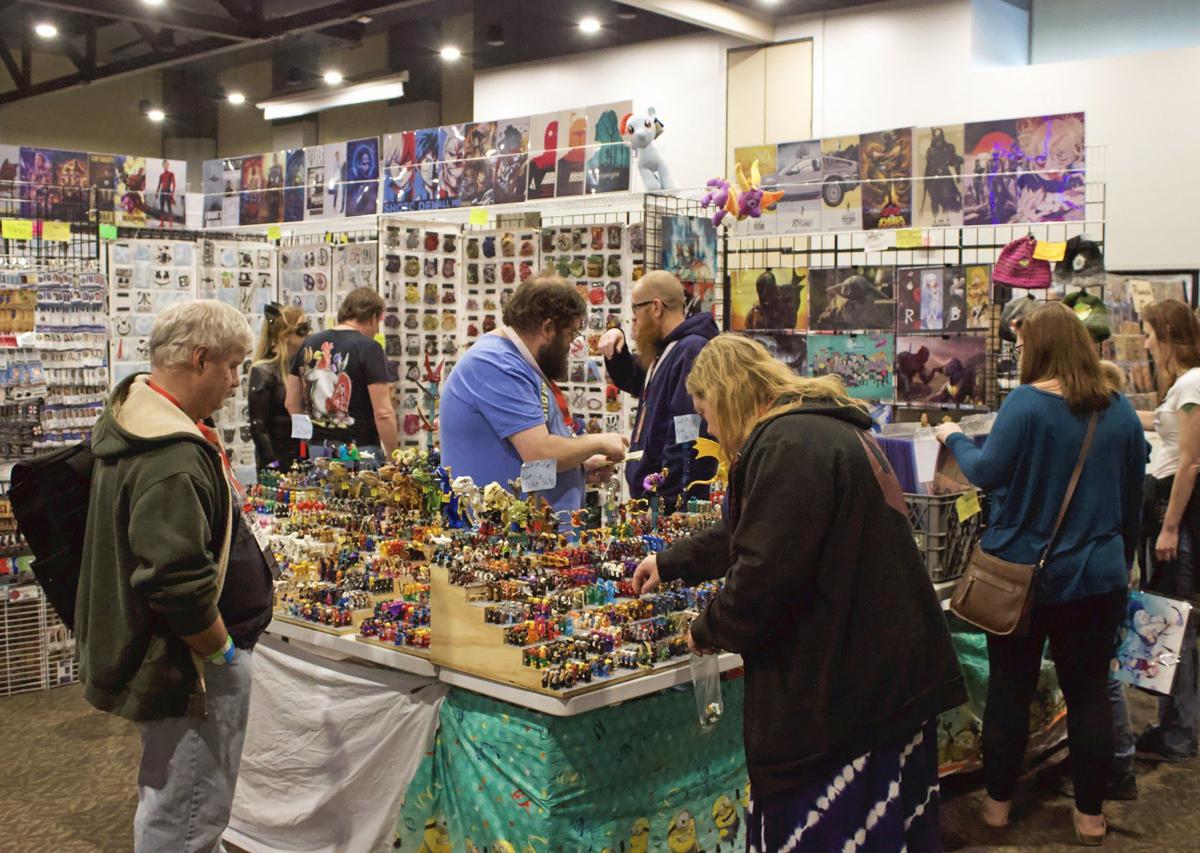 Fayetteville Comic Show attendees shop for merchandise during the convention March 1 at the Fayetteville Town Center. 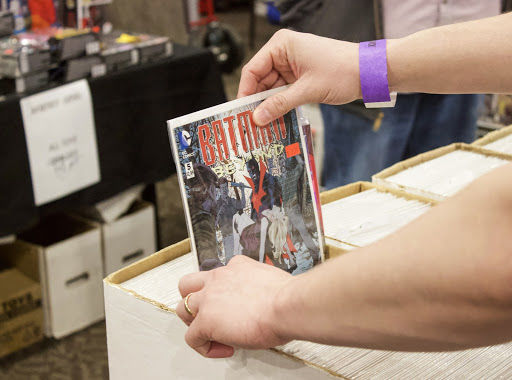 Cosplayers traveled from Shreveport, Louisiana, to finally meet their online Tik Tok friends in person at the first Fayetteville Arkansas Comic Show inside the Fayetteville Town Center from Feb. 29 to March 1.

Attendees from near and far flooded the Town Center dressed in full costume as characters from the Marvel and Dragon Ball universe. Film and television actors such as C. Howell and John Shipp signed autographs and took photos with attendees while the artists and collectors bonded over their shared love for anime and comics.

Michael and Opal Beckworth drove all the way from Shreveport, Louisiana, to finally meet up with their online friends, Matthew and Stacey Warnock.

“My husband is obviously very into cosplay and comics, so by dressing up, I’m able to participate with him,” Opal Beckworth said. “It’s super fun to become another character.”

With over 21,000 followers on TikTok, Matthew Warnock cosplays as Superman in his TikTok videos and at comic conventions. He said he found online friendship through making duet videos on TikTok with another cosplayer, Michael Beckworth.

Stacey Warnock of Fayetteville said she shares a love of cosplay with her husband, Matthew Warnock. The couple has attended more than 20 conventions together.

“Cosplay is what bonds us together,” Stacey Warnock said. “It’s something we both equally enjoy.”

Jonathan Wilkett, a co-owner of the event, said he hoped the event would inspire locals to participate in comic culture and interact with new people.

Paul Wilkett, a co-owner of the event and uncle to Jonathan, originally owned a security business with his nephew before tackling the Fayetteville Arkansas Comic Show. Jonathan Wilkett said he and his uncle had been preparing for this event for two years.

Tabitha Asher, a comic artist at the Fayetteville Arkansas Comic Show, said she combined her love of creating comic art and her hopes for CALMM Autism Resource, her non-profit. Selling her art as a way to fund her nonprofit, Asher started doing conventions to support the needs of her two sons, who both have autism.

“Both of my boys love superheroes,” Asher said. “I started dressing up as Robin because my son dressed up as Batman, I was his partner. It’s very symbolic for me to dress up as his supporting character because my son is my superhero in real life, too.”

Tiffany Shafer, a convention attendee has been cosplaying for more than ten years, dressing up as many characters from the Dragon Ball multiverse, including Vegeta and Bulma, as she said she loves the Brief family. For this convention, Shafer spent over 24 hours sewing and painting her costume for Trunks, a character from the Dragon Ball multiverse.

“I honestly just pick a character and go for it,” Shafer said. “Comic conventions are just a bunch of nerdy people dressing up as characters they love.”

Shafer’s hope for the Fayetteville Arkansas Comic Show is that it will continue to grow. She said she thinks it would be great for the area to have more of a Comic Con presence.

“We’re meshing every affiliation of comic collectors, artists and celebrities all in one place,” Jonathan Wilkett said. “We want to bring everyone together and try to mend all things ‘nerd’.”

Raegan Holland is a staff reporter for The Arkansas Traveler.