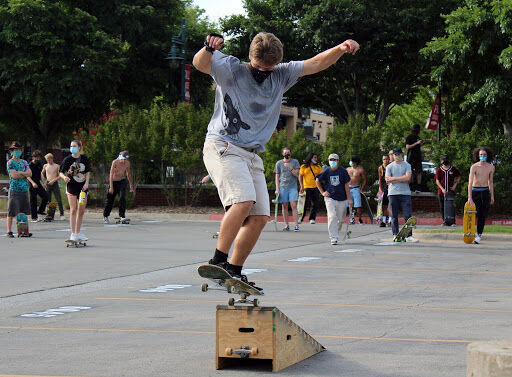 Activists congregate on Dickson Street during Skate Against Hate, an event organized by Path Skate Shop to act as a catalyst to amplify minority voices. 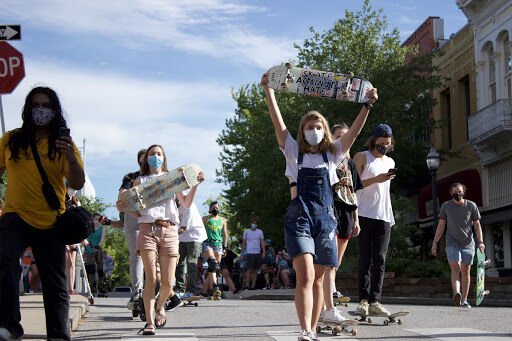 Skaters circled the Fayetteville Town Square holding signs and chanting in support of racial minorities in the community.

Activists congregate on Dickson Street during Skate Against Hate, an event organized by Path Skate Shop to act as a catalyst to amplify minority voices.

Skaters circled the Fayetteville Town Square holding signs and chanting in support of racial minorities in the community.

A crowd of Northwest Arkansas skaters congregated at the Fayetteville Town Square on Sunday evening to partake in a peaceful protest supporting the Black Lives Matter movement and NWA racial minority groups.

Masked protesters wore roller skates and rode bicycles or skateboards to participate in the event. Many of them held signs and chanted as they circled the square and protested racial injustice. Skating rookies and masters alike gathered to engage in their hobby while showing their support for racial minority groups in the community.

The event included a moment of silence for Breonna Taylor, a 26-year-old Black emergency medical technician who was fatally shot in her bed March 13 by Louisville police officers. Taylor’s death is among several acts of police brutality that have sparked protests across the U.S. this summer.

Path dedicates itself to providing sanctuary for all artists and creatives in NWA, said Path Skate Shop Co-owner Bill Harris. Harris views skateboarding a catalyst for people of diverse backgrounds to band together, he said.

“I am trying to do my small part to make a more inclusive society,” Harris said. “It’s an important time in history.”

Several minority speakers shared personal anecdotes outlining their experiences with racism in Northwest Arkansas. Ēlxr Yoga Lounge Owner Nicole Calhoun described her experience as a Black yoga instructor to the crowd and the backlash she said she faced when she opened her own studio. Calhoun spoke directly to her white allies, urging them to learn to take a supporting role in the movement.

Fayetteville resident RJ Geiss, 32, has been skating for 20 years. He said he thinks the skateboarding community has been a place that he feels at home in Fayetteville. Geiss said the community unites people from all backgrounds and walks of life, and he wants to demonstrate that skaters are behind equality for everyone.

“For the longest time skateboarding had a really rough name due to a lot of rebellious activity. It was a little against the mainstream,” he said. “We want to show the city that we are behind a positive change for all of us.”

As the evening went on, the number of skaters continued to grow. They rode around the Fayetteville Town Square several times and convened at the corner of Dickson Street and West Avenue. The event culminated in a group demonstration of skating skills followed by more chants in support of minority voices.

The event was scheduled to begin at 5 p.m. and lasted for several hours after the initial protest on the Fayetteville Town Square. Path Skate Shop encouraged social distancing and for participants to skate within their own ability to avoid incidents.

Springdale resident Samuel Rivera Lopez said that he thinks the event is a way for the skating community to show their support of racial minorities in NWA while protesting recent injustices.

Lopez said he thinks it is important to protest in order to generate a message of solidarity between people affected by racism in the United States, but he thinks it is more crucial to make a political change by voting in the November election.

“What good is a protest if s--- doesn’t change?” Lopez said.

Heidi Kirk is a staff photographer for The Arkansas Traveler.