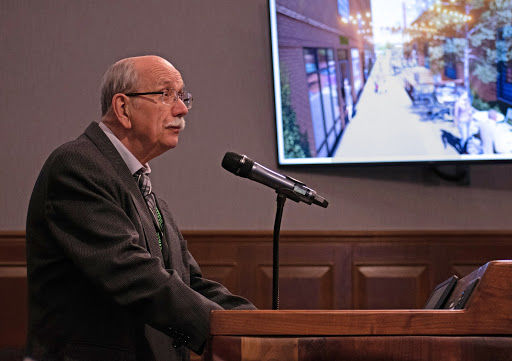 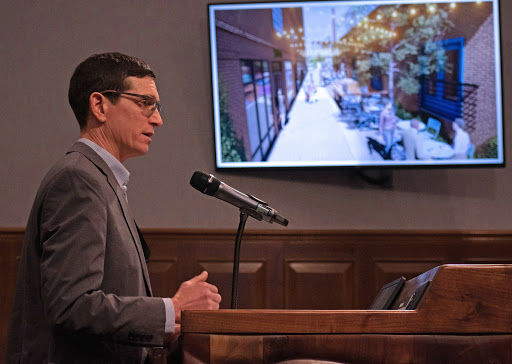 Peter Nierengarten, environmental director in the city of Fayetteville's Sustainability and Resilience department, address city council members Jan. 21 regarding the potential parking deck at the Depot.

Fayetteville City Council members approved a proposal to place the five-level parking deck that will replace a lot near Arsaga’s at the Depot during the construction of the $10 million Cultural Arts Corridor.

After about three hours of discussion, five Fayetteville City Council members voted “yes” and three voted “no” on the letter of intent to begin negotiations for building the deck, with many agreeing that the School Avenue (East Lot) location is an acceptable secondary option for parking.

Community members spoke to the City Council about their concerns for the placement of the deck at the corner of Dickson Street and West Avenue, pointing out congestion in the area already, possible safety concerns for crossing to the Walton Arts Center and what would be lost for the art community if Arsaga’s at the Depot was to change.

Other community members spoke to the benefit of the deck and possible hotel that would be built on the lot, expressing their excitement for new possible revenue, the proximity to the Walton Arts Center, and the option to leave the East Lot open for other projects.

Community members attended a Q&A session Jan. 16 at City Hall regarding the downtown parking deck and Cultural Arts Corridor where they got the chance to learn more about the project and share their thoughts.

Council member Sarah Marsh, who voted “yes,” said despite the recent public forum regarding the parking deck, none of that feedback was present in the plans.

“I think that that really sums up what has been so frustrating about this process,” Marsh said.

Marsh later voted in favor of the proposal, while council members Mark Kinion, Sonia Gutierrez and Teresa Turk voted against it.

Marsh thinks that the feedback of those who attended the Q&A and other meetings has not been considered, she said.

Council member Mark Kinion expressed his concerns that the presentation was biased and that developing the East Lot had not been properly discussed.

“We have not got the same information on the East Lot,” Kinion said. “It has been ignored.”

Council members must vote on the letter of intent to start negotiations on the replacement parking before the second phase of construction for the Cultural Arts Corridor can start.

Steve Clark, president of the Fayetteville Chamber of Commerce, attended the city council meeting to speak in favor of going forward with plans to build the parking deck in the Depot Lot, he said.

Clark supports building on the Depot Lot for two main reasons: the potential to gain economic development opportunities through more businesses in the entertainment district, and the proximity to the Walton Arts Center and TheatreSquared, he said.

Some of the community member’s concerns for the deck were that they wanted to be able to see where they were going, and the Walton Arts Center is only around 400 feet from the proposed deck in the Depot lot, Clark said.

Fayetteville resident Jerry Davis has worked on Dickson Street for the last 8 years, he said during the public comments section.

Davis thinks that the Depot Lot is the best option for the parking deck because of its centralized location which will help generate revenue, especially if the hotel is added there, he said.

The city will not own anything in the lot other than the parking deck, and the developer will own the liner buildings.

Cary Arsaga, owner of Arsaga’s at the Depot, thanked the people of Fayetteville for supporting his business after expressing concerns at the last meeting.

The last time Arsaga attended the meeting, “we as a family business felt very vulnerable,” he said. He has since come to an agreement with Houses Inc. that the family is comfortable with as the proposal to use the Depot Lot goes forward, he said.

The plan includes compensation for when construction starts and funds to create severance packages for employees, Arsaga said.

Fayetteville resident Will Dockery has been leaning more towards the East Street deck and thinks there are ways to get more creative there, he said.

“What we choose will affect the future of Fayetteville’s downtown for years to come,” Dockery said.