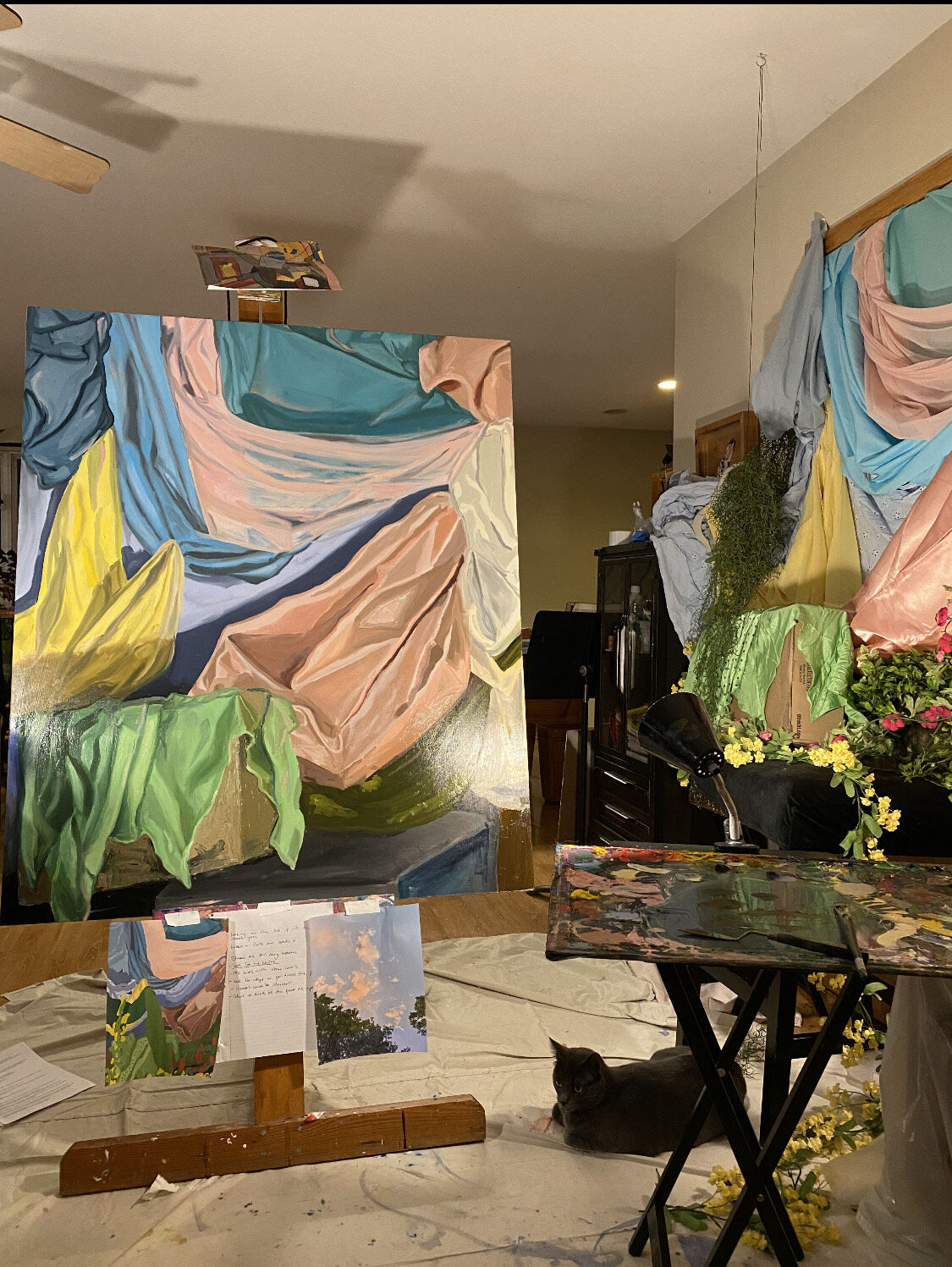 Marriah Geels' makeshift painting workspace, featuring a thrifted easel, that she created in her home in response to not being able to spend as much time in the studio on campus. // Courtesy of Mariah Geels 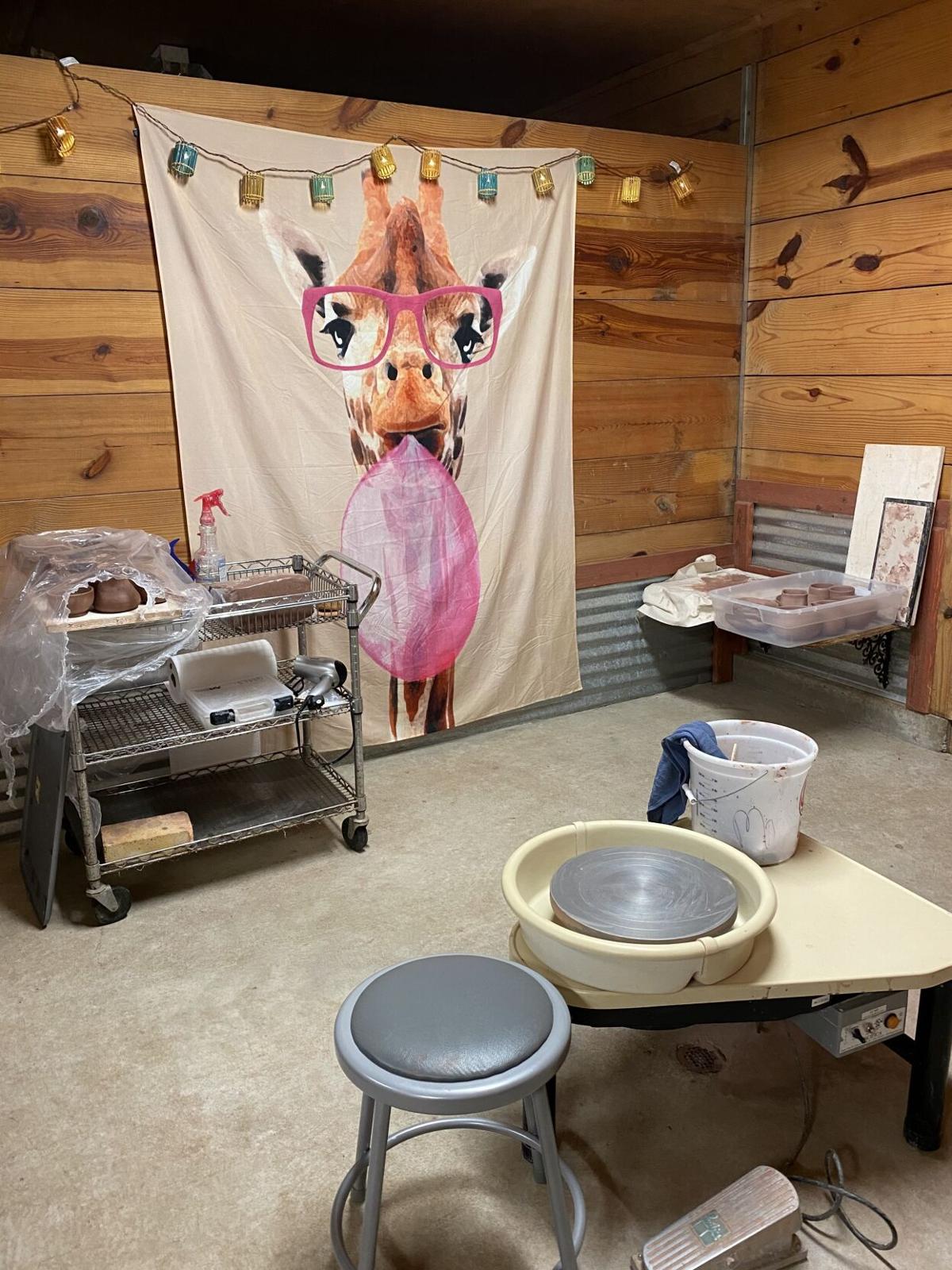 Geels’ makeshift pottery studio that she created in a barn space near her apartment. // Courtesy of Marriah Geels. 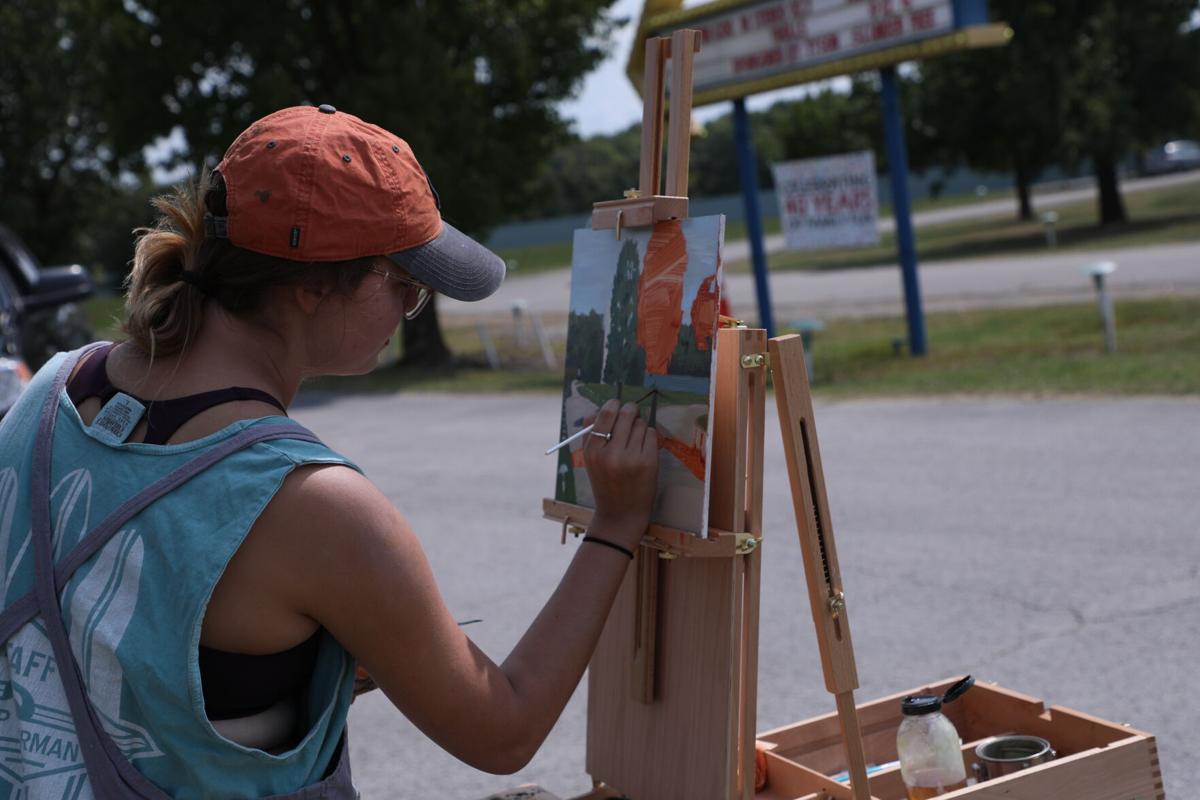 UA junior Gracie Orlie working on her painting during professor Neil Callander's landscape painting class Sept. 17 at the 112 Drive-In in Fayetteville. Callander adapted his class to safely allow students a chance to collaborate with each other.

Marriah Geels' makeshift painting workspace, featuring a thrifted easel, that she created in her home in response to not being able to spend as much time in the studio on campus. // Courtesy of Mariah Geels

Geels’ makeshift pottery studio that she created in a barn space near her apartment. // Courtesy of Marriah Geels.

UA junior Gracie Orlie working on her painting during professor Neil Callander's landscape painting class Sept. 17 at the 112 Drive-In in Fayetteville. Callander adapted his class to safely allow students a chance to collaborate with each other.

Students of studio-based degree programs have transformed their living spaces into functioning classrooms, art workshops and creative suites after their access to on-campus studios was curtailed.

Architecture and studio art students typically spend the majority of their time on campus in studio spaces dedicated to their craft. As a result of the UofA’s COVID-19 safety precautions, architecture students can only use their studio space up to 12 hours a week, while art students work with their professors for limited studio access.

Some students attend outdoor classes with their professors, while others have reimagined their lost studio spaces in their own homes. Marriah Geels, a senior music and art education major, established a fully functional pottery workshop outside her own home in response to studio changes.

After all of Geels’ classes were moved online, she transformed a barn space near her apartment into a ceramics studio, using a pottery wheel provided by the school of art. While she’s gained experience with creating her own studio space, working alone has made learning the craft more difficult, Geels said.

“We get a taste of what it’s like to have your own studio,” Geels said. “Post-college, a lot of artists struggle with setting up their own space, and if they have to live with their studio or their area where they (create), it’s kind of difficult.”

Geels said she’s learning more about creating on her own rather than the technical side of artwork.

“I’m not learning as much about the material and the process, because we’re not able to make clay like we usually would or fire kilns,” Geels said. “We’re all given the same type of clay, so we can’t really learn about how we make (artwork) with other materials, we’re just learning about more of how we make by ourselves in our own environment, not in a studio setting.”

While some students may struggle with at-home creation, others may benefit from the creative freedom it allows for, said Neil Callander, the BFA studio art coordinator.

Professors of studio art courses have adapted their curriculum to the circumstances. Callander’s landscape painting course travels to various outdoor locations in an effort to safely collaborate.

“We’re basically being outside all the time, because it’s a safer way to be if we’re going to try and be in-person,” Callander said. “We’re just spread out painting and it’s almost like normal life, almost, except we would typically be coming inside to have our critiques once in a while, which we’ll do that online.”

On the other hand, some architecture students said their program is far from normal. With COVID-19 precautions in place, their usually unlimited access to working spaces in Vol Walker Hall have been reduced to two days per week.

Some students have renovated their homes to simulate their lost studio space, while others have sought out additional locations to act as a studio replacement.

Mary Grace Corrao, a fifth-year architecture student, transformed the closet in her bedroom into a studio space.

“It’s different than having your own desk and your own space in a studio and being able to keep things overnight there,” Corrao said. “You never have to move your laptop or put away your drawings, you can just pick up where you left off.”

Still, working from home has hindered Corrao’s learning experience as she has lost access to working alongside her peers and professors, she said.

“Studio is a huge collaboration,” Corrao said. “You’re always doing something (design-related), you’re always talking about it. No matter what you’re talking about, architecture and design will be a part of that conversation, not even necessarily on purpose, just because you’re in that atmosphere 24/7. It’s its own little world, and that has been really taken away with the online class. It’s really hard to look at a design on a laptop or a drafting of a plan on a laptop.”

Other architecture students, like third-year Evan Roberts, have attempted to safely recreate a collaborative workshop by renting an off-campus office space. A group of 15 architecture, interior design and landscape design students rented the office space to substitute for the studio, she said.

“Because it’s all online, it’s exponentially greater because we still have the community aspect of studio,” Roberts said. “We can sit there and talk about our designs and get feedback in-person one-on-one, and from other majors like interior and landscape, we can get influence of theirs too on how to improve our design. All of our other classes, we all have together too, so if we have any questions, it’s really nice to ask the person next to you, like we would be able to do in a regular studio.”

Roberts said each person spends approximately $40 a month to use the workroom. Being able to use the makeshift studio is worth the cost, she said.

“(Without) a studio, it’s a lot harder to progress in the design process after having critiques with our professors,” Roberts said. “It’s really hard to get full ideas across when you’re not in there, seeing them, hands on. It’s a lot more challenging, but by being together and facing the challenge with all of them, it’s a lot more beneficial. I’ve increased my projects from what they would be at without being in-person to a lot more just with the help from my peers.”

The students that use this office are required by the building’s management to wear masks and sign in and out of the facility. The desks are spaced six feet apart, similar to the assembly of on-campus classrooms, Roberts said.

No matter how students adapt to the circumstances, the element of community has been lost for the time being, Corrao said. While studio spaces are difficult to replicate, Corrao said she doesn’t think the situation will affect architecture students in the long run.

“All the great architects are not great architects until they’re like 50 years old,” Corrao said. “So architecture, you are learning for the majority of your life, so I don’t think it’ll impact any architect for the long-term.”

Hanna Ellington is an assistant editor for the Arkansas Traveler.