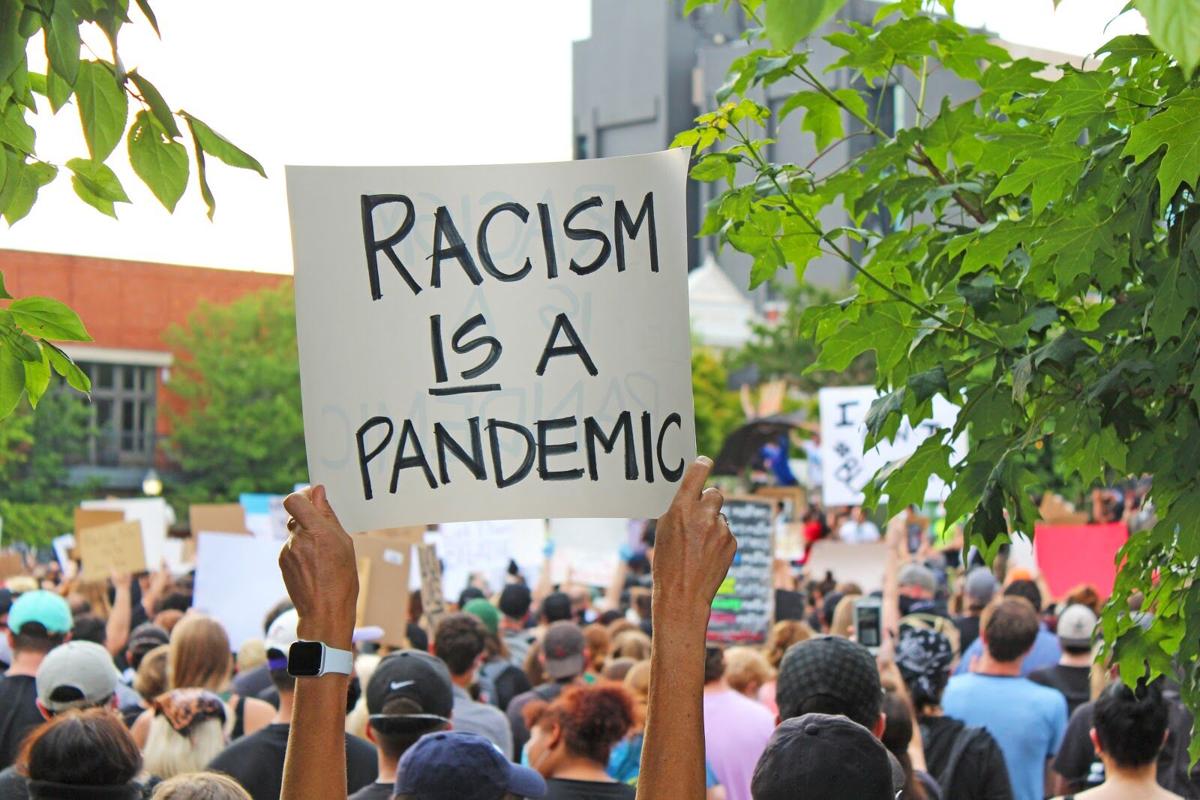 NWA residents gathered in the Fayetteville square June 2 to commemorate the death of George Floyd. Many protesters carried signs, some of which suggested that COVID-19 is not the only pandemic facing America. 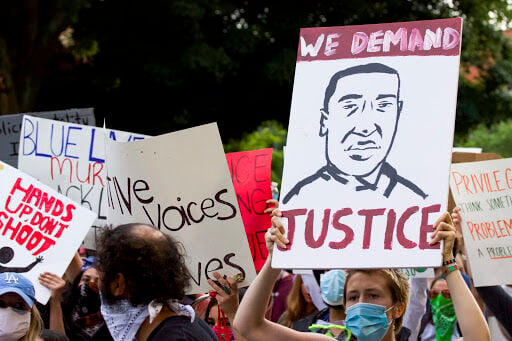 Northwest Arkansans met at the Fayetteville Town Square to protest the death of George Floyd on June 2. Floyd was killed when an officer knelt on his neck for nearly nine minutes.

NWA residents gathered in the Fayetteville square June 2 to commemorate the death of George Floyd. Many protesters carried signs, some of which suggested that COVID-19 is not the only pandemic facing America.

Northwest Arkansans met at the Fayetteville Town Square to protest the death of George Floyd on June 2. Floyd was killed when an officer knelt on his neck for nearly nine minutes.

Thousands of protestors gathered at the Fayetteville Downtown Square on Tuesday night to denounce police violence and mourn the loss of George Floyd, a black man killed when a Minneapolis police officer held a knee to his neck for almost nine minutes.

Floyd’s May 25 death, caught on camera by a bystander, has sparked protests in all 50 states and in several countries around the world. Some cities, such as Minneapolis, Los Angeles and New York, have imposed nightly curfews in an attempt to quell the protests and accompanying looting.

About 4,000 protesters attended Tuesday’s peaceful rally and march to express their support for the Black Lives Matter movement, which aims to eliminate systemic racism in American policing and other areas of society.

Sgt. Anthony Murphy of the Fayetteville Police Department said there were no arrests and very few disturbances throughout the evening.

“The protest was a great demonstration of our freedom of speech and the First Amendment,” Murphy said. “It was truly a community effort.”

Several speakers shared words of encouragement and personal stories with the attendees. The event also included an 8 minute moment of silence in memory of George Floyd and culminated with supporters circling the square while holding signs, chanting and singing.

Fayetteville resident Lakesha Edelen, 43, who is biracial, said her three multiracial grandchildren were her motivation to protest. Edelen’s white mother, Annette Edelen, described how challenging it was to raise a biracial child in the south. Edelen said she would make her daughter sit under the floorboard of her car when driving through southern Arkansas out of fear of racist backlash.

“When I go to the white side of my family, there were very few that accepted me,” Lakesha Edelen said.

The Edelen’s, like many, came bearing signs, one of which said “BLACK LIVES MATTER” in bold. The other read, “GRIEF IS LIKE LIVING TWO LIVES. ONE IS WHEN YOU PRETEND EVERYTHING IS OKAY AND THE OTHER IS WHERE YOUR HEART SILENTLY SCREAMS IN PAIN.”

Activist Taylor Reed, 25, held a sign that read “Time For A Revolution.” She said her friends worked together to make signs for the protest. Though she is white, Reed said that she thinks it is crucial that everyone is involved in the anti-racist movement.

“It is time for a revolution. I believe that,” Reed said. “It is important for everyone to stand up for this no matter what our pasts are.”

Some attendees, including Gustavo Sanchez, of Fayetteville, handed out water and snacks to protesters. Sanchez said he wanted to help the movement by ensuring protesters would not get ill or faint from dehydration in the Arkansas heat.

“If I could save just one person tonight that would be amazing,” Sanchez said.

As the night continued, the energy of the crowd intensified. Fayetteville resident Julia Sampson described the crowd as “revved up and emotional,” as she paraded through the square wearing a colorful Black Lives Matter t-shirt.

“This is a very good first step,” Sampson said, “It is time for the people to lead.”

The event was scheduled to last from 6:30-9 p.m., but some protesters remained for several more hours, continuing their marches and chants.

Aside from a few tense moments, such as some thrown water bottles, lit fireworks and a vocal dissatisfaction in response to the singing of the national anthem, the protests remained peaceful.

In a Facebook post Wednesday, Fayetteville Police Department officials thanked community members and law enforcement officers for their commitment to keeping the peace during the protest.

“We are so grateful for the support from everyone at the peaceful protest last night,” the post read. “A huge thank you to the citizens peacefully protesting that intervened when individuals attempted to lure officers into conflict by throwing fireworks, eggs, and water bottles at them. Cooler heads truly did prevail!”

Heidi Kirk is a staff photographer for The Arkansas Traveler.