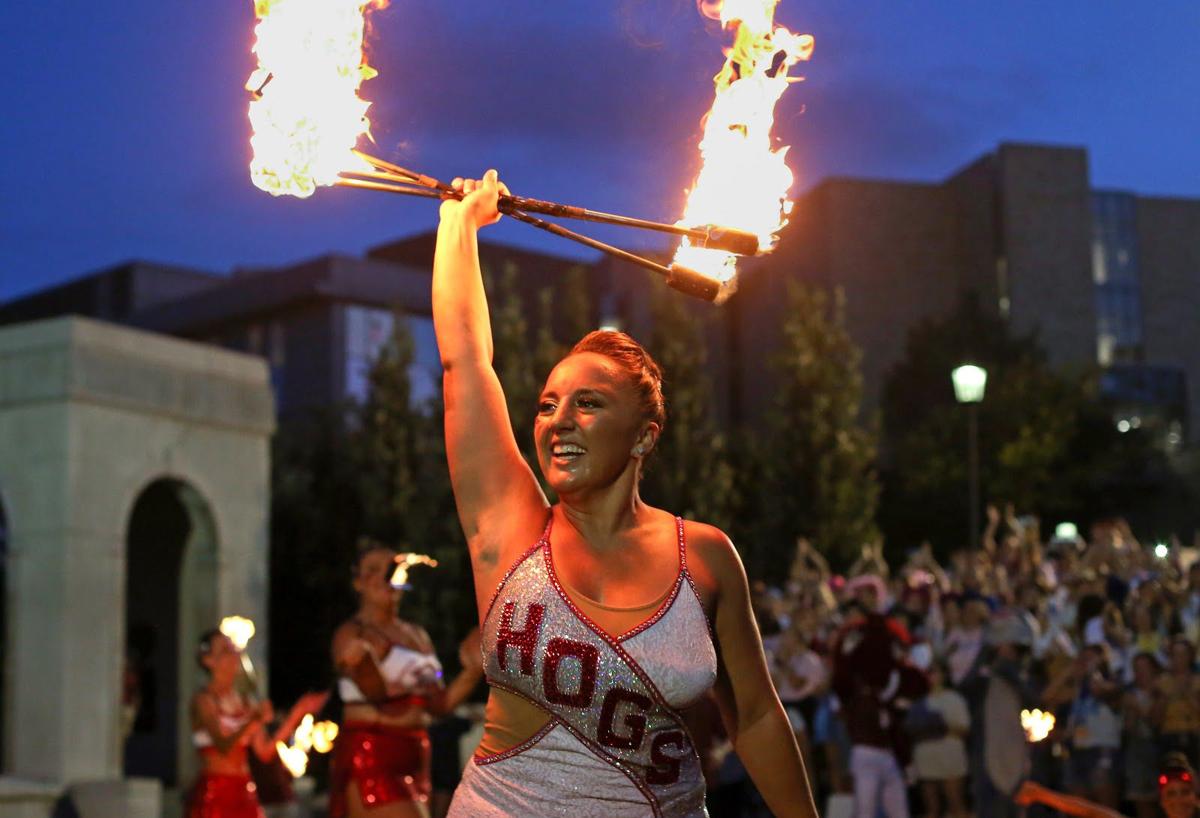 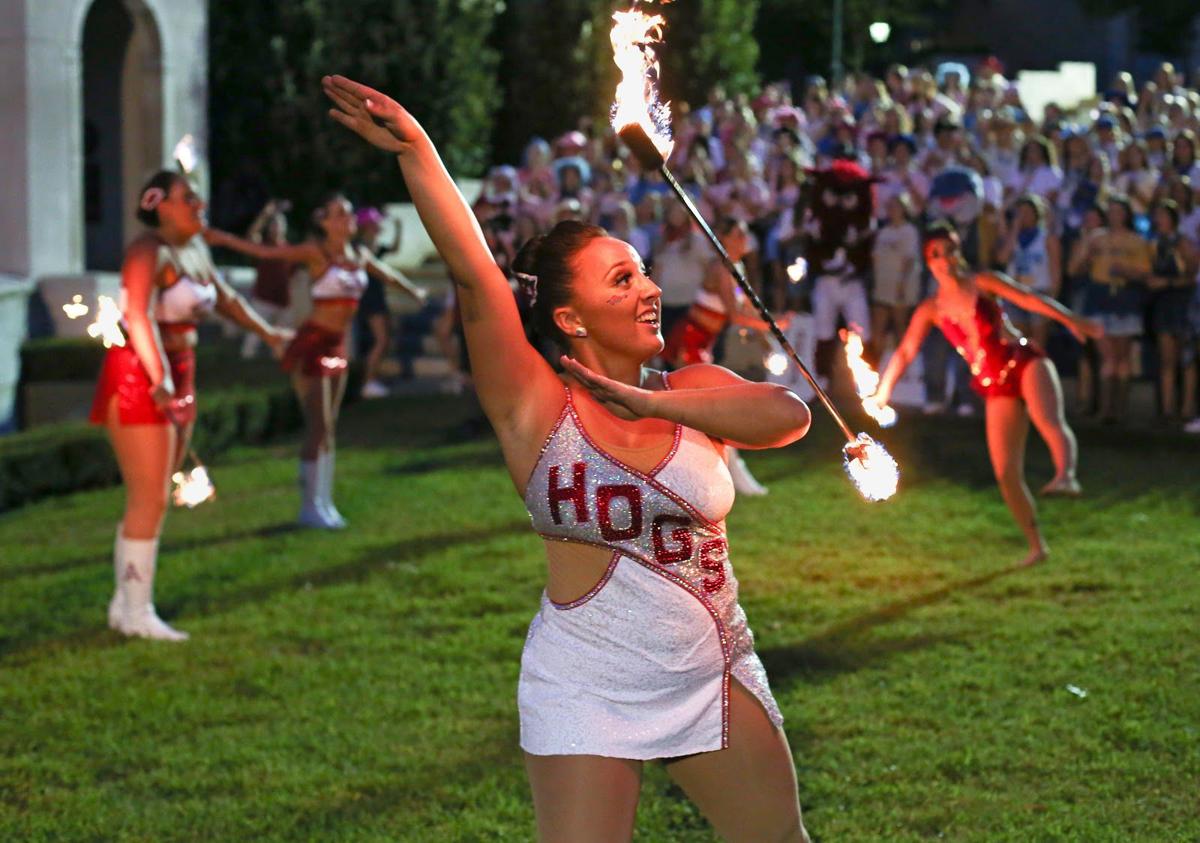 When she could not hit a tennis ball at 3 years old, her parents thought she would never be an athlete. Twenty years later, she has won more than 30 national baton twirling championships, 17 international gold medals and two national collegiate championships.

Savannah Miller, a senior and the Razorback Marching Band feature twirler, will graduate in December with a Bachelor of Arts in journalism and hopes to pursue a career as a news or digital media producer. Although her final football season has come to a close, Miller’s twirling career is far from over. She plans to compete on Team USA for one more year after she graduates.

Miller’s most intense training season will begin in January, when she will practice for 4-6 hours every day. She will compete at least once a month leading up to Team USA selections at the end of March, and if she makes the national team, she will compete April-August of 2020.

A typical training session for Miller begins with 30 minutes of stretching, followed by technical warm-ups to get her hands and body moving, she said. Miller then spends the next two-six hours practicing her routines until she feels satisfied, and she finishes out each training session with more stretches.

Training for a twirling competition is different than training for a halftime performance because crowd members at a football game are not as familiar with Miller’s skill set as judges at a competition, said Miller’s head coach, Dale White, 60, from Dayton, Ohio.

On and off the field, Miller strives for perfection and regards herself as her toughest critic, she said.

“I think my parents and my coaches can attest to this : I am the hardest person on myself,” Miller said. “I will come off the field or after a performance and I will be like, ‘Wow, that was terrible.’ I think about all the little negative things that even the judges aren’t noticing.”

White thinks that while Miller is critical of her own performances, her standards reflect the nature of the competition and her deep history with the sport of twirling.

“She’s very realistic in that regard,” Miller said. “She knows what her weaknesses are, and she also knows her strengths.”

Miller got her start in twirling at the age of 3 when her parents enrolled her in dance classes at a studio in her hometown of Kansas City, Missouri. Her dance instructor, a former twirler hoping to keep the sport alive, placed a baton in each child’s hand at the end of every class and let them try their hands at twirling.

“I was instantly hooked,” Miller said. “I remember throwing a tantrum in the lobby of the dance studio. I kicked my shoes off because I wanted to stay and take baton class.”

Within a year, Miller joined Team USA, competing as the youngest in her age group.

Miller comes from an athletics-driven family with two brothers active in sports, she said. While her parents never intended to put her in twirling, they knew they wanted her to get involved in a sport at a young age.

“My dad originally thought that I was going to be a tennis player,” Miller said. “He went to the store and bought me a super expensive racket, and he took me downstairs – at 3 (years old), mind you – and tried to teach me how to hit a tennis ball, and I was not having it. He told my mom that I would never have an athletic bone in my body.”

Miller derives motivation from the crowds of cheering Razorbacks fans and wants to give them “something to look forward to when the Hogs are losing,” she said.

The Arkansas Razorback football team lost 10 out of 12 games during the 2019 season.

Whether she is in line at CVS or the campus Starbucks Coffee, Miller said fans recognize her on almost a daily basis, she said. Sometimes people approach her, and other times, she can hear them whispering about her. Miller considers this both a blessing and a curse, she said.

“I never really noticed until this past semester how much my journey has impacted so many other people,” Miller said.

When Miller graduates, she will pass on the feature twirling position to sophomore Isabella Udouj.

Udouj, who has been twirling since she was 6 years old, came to the UofA with a childhood dream of being feature twirler. Having competed through her senior year of high school, she is eager to get back on the field and continue her passion, she said.

“It’s kind of just been really cool to see how everything has played out,” Udouj said. “I’m just so excited to be back to perform for the crowd.”

Miller is spreading her passion for baton twirling to younger generations of twirlers worldwide through her role as an international choreographer and clinic instructor. She has taught at clinics in several countries, including Spain, France and the Czech Republic.