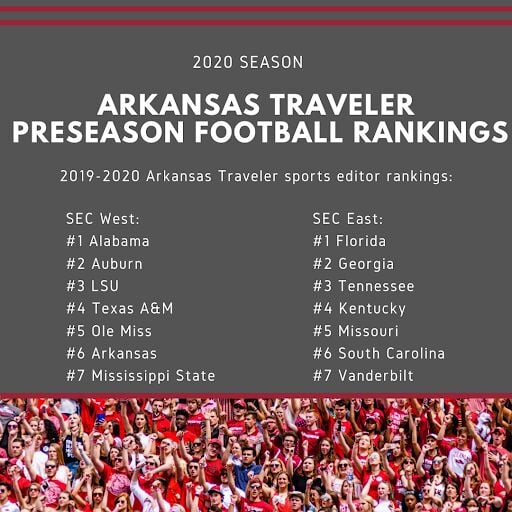 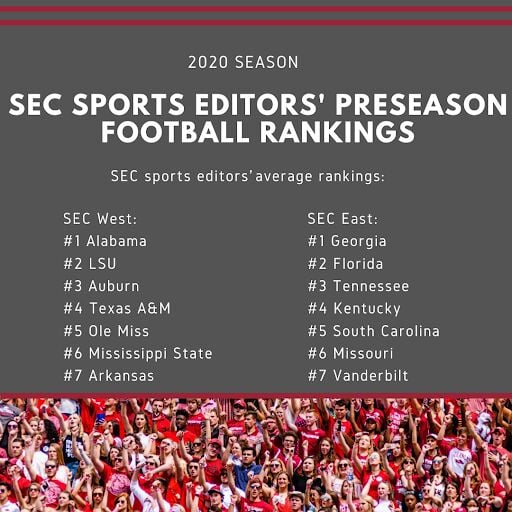 Over the summer, sports editors for the 14 Southeastern Conference campus newspapers submitted their football rankings in advance of the 2020 season.

The rankings serve as a reminder of how difficult it will be to elevate Razorback Football out of irrelevance, especially with a conference-only schedule, even with new head coach Sam Pittman at the helm.

With the addition of the No. 8 Florida Gators and the No. 4 Georgia Bulldogs to the Razorbacks’ schedule, Arkansas is scheduled to face six top-25 opponents in 2020.

Lydia Palmer of Mississippi State University’s The Reflector was the only ranker to include a program other than Florida and Georgia in the top two SEC East spots. Georgia received one more first-place ranking than Florida did, giving the Bulldogs the top spot in the average rankings.

In the West, there was a more clear-cut favorite to win the division. All but one set of rankings feature the third-ranked Alabama Crimson Tide atop the juggernaut that is the SEC West, rather than the defending national champions, No. 5 LSU. Collin Speicher and Michael Sauls of the University of South Carolina’s Daily Gamecock gave the nod to coach Ed Orgeron’s Tigers.

Below the Tide, most second, third and fourth spots feature some array of LSU, No. 11 Auburn and No. 13 Texas A&M. In the basement with the Hogs are two programs also attempting to rebrand themselves with new head coaches, Ole Miss and Mississippi State. Both the Rebels and the Bulldogs received an overwhelming share of fifth- and sixth-place votes with the Razorbacks bringing up the rear.

The other opponents Arkansas has on the slate this season are the Tennessee Volunteers and the Missouri Tigers. More than half of the rankings saw the Tigers finishing sixth of seven, and only one ranker, Eli Hoff of Mizzou’s Maneater, predicted a finish higher than fourth. The Volunteers, on the other hand, brought in most of the third-place votes, and only two editors placed them lower than fourth.

Whether or not the SEC is able to play its season to completion amid the coronavirus pandemic, there is an argument to be made that Arkansas has the most treacherous college football schedule ever devised.

As the consensus last-place finisher in the West Division, the Razorbacks already have their work cut out for them. Add Florida, Georgia and Tennessee, the projected top three teams in the East Division, and suddenly two wins for the third consecutive season seems almost unreasonable.

The Razorbacks are scheduled to kick the season off against Pittman’s former employer, the Georgia Bulldogs, Sept. 26 in Fayetteville. Barring any postponements or cancelations, the regular season will run 11 weeks, concluding with a tilt against Alabama Dec. 5.