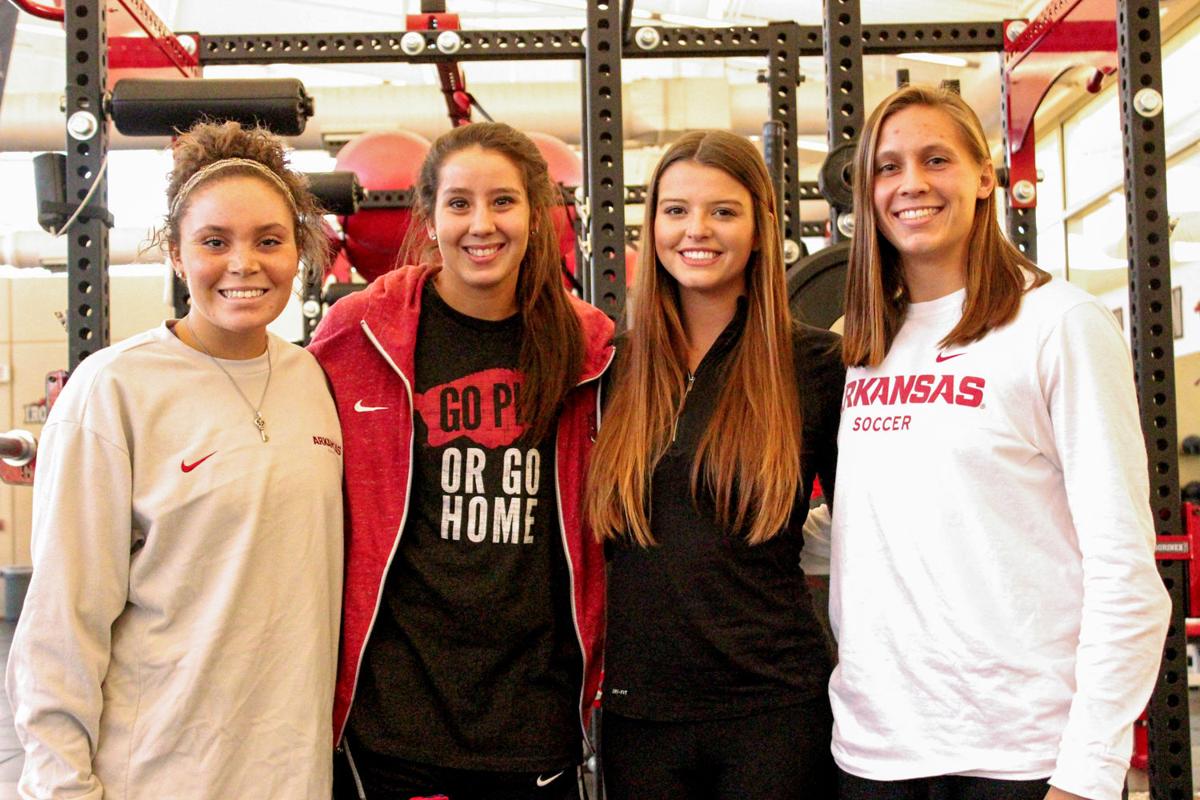 Cameron Carter, Claire Kelley, Alexandra Fischer and Lindsey Mayo pose in the Bev Lewis Center on Dec. 1. They  are four of the seven seniors on the Razorback soccer team. 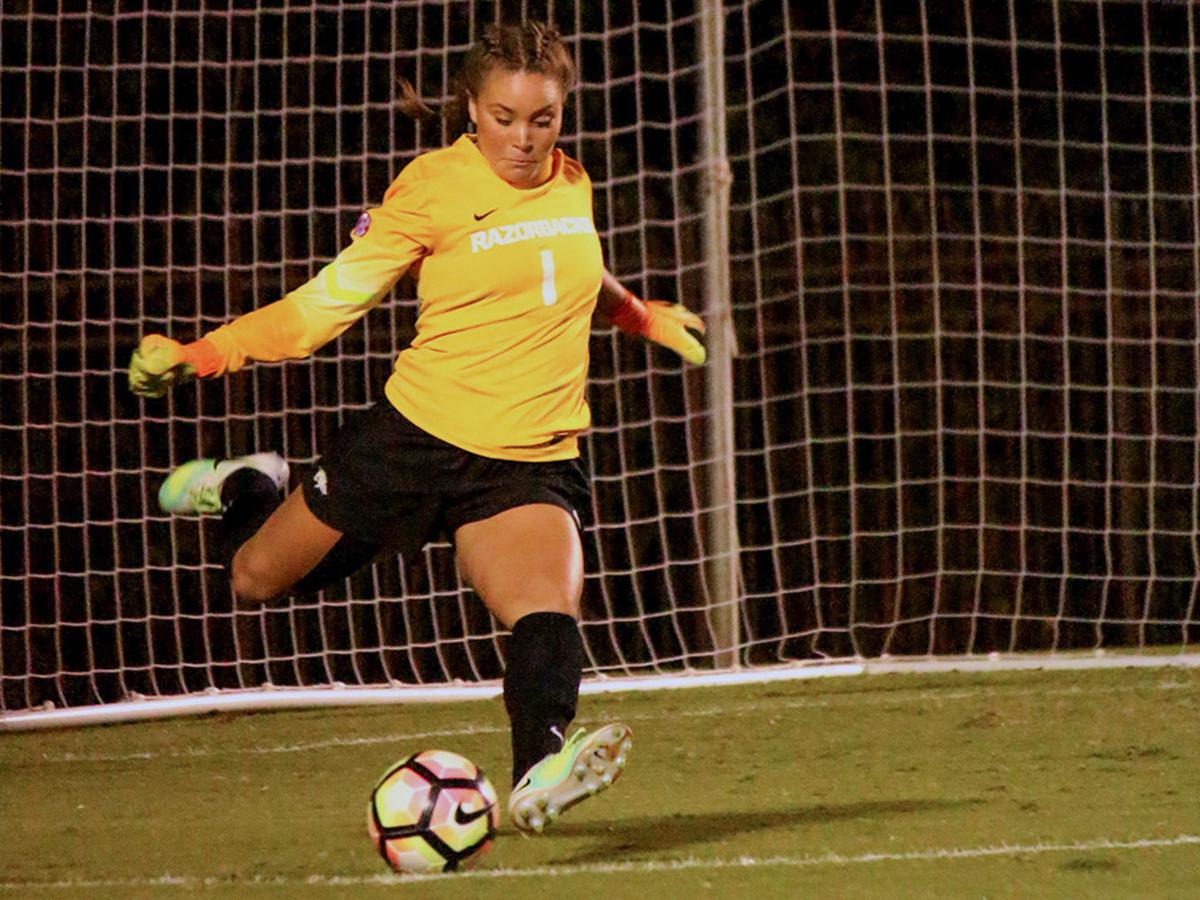 Goalkeeper Cameron Carter boots a goal kick during a 1-0 win over Missouri on Oct. 20. 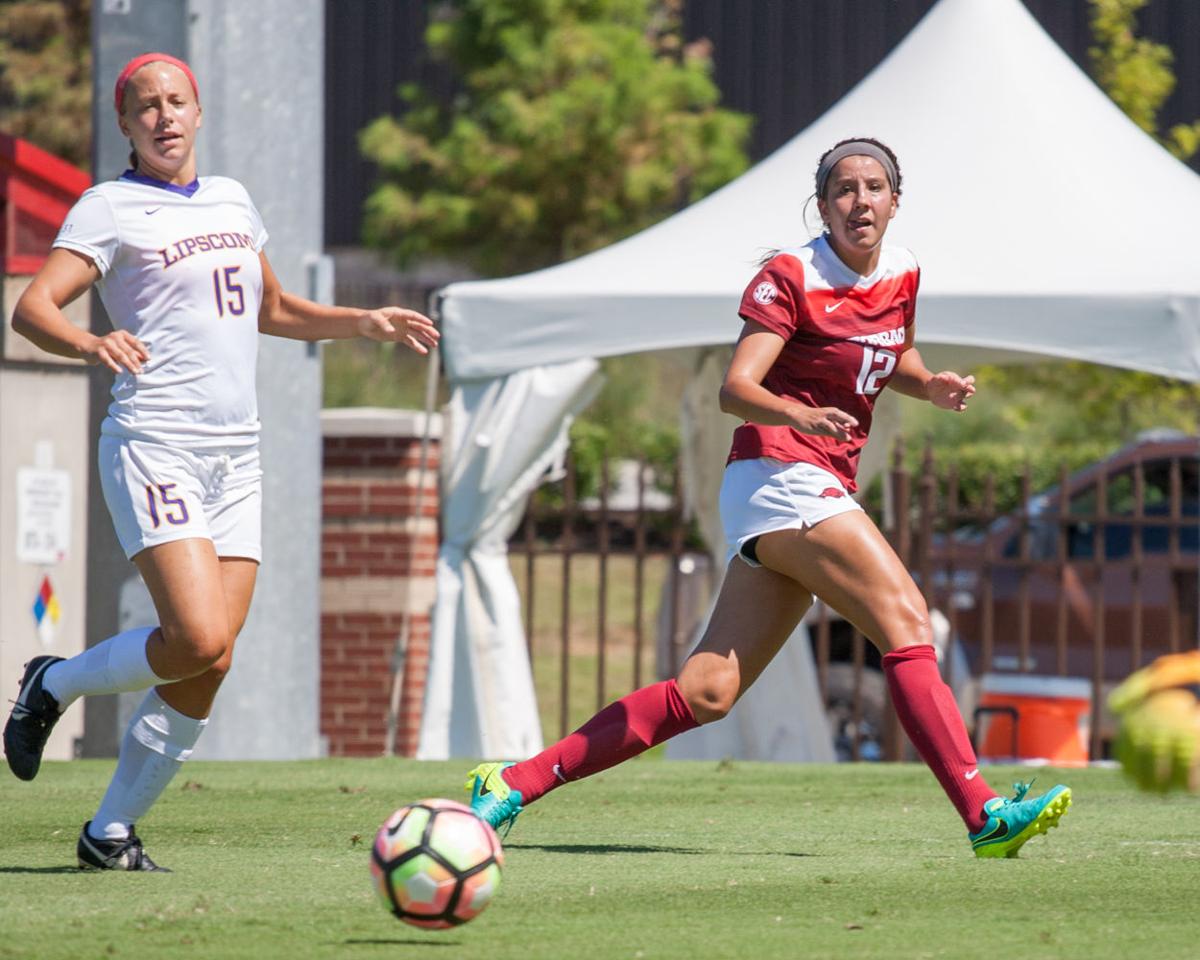 Midfielder Claire Kelley runs down the pitch against Lipscomb University on Sept. 18. The Hogs defeated Lipscomb 2-1.

Cameron Carter, Claire Kelley, Alexandra Fischer and Lindsey Mayo pose in the Bev Lewis Center on Dec. 1. They  are four of the seven seniors on the Razorback soccer team.

Goalkeeper Cameron Carter boots a goal kick during a 1-0 win over Missouri on Oct. 20.

Midfielder Claire Kelley runs down the pitch against Lipscomb University on Sept. 18. The Hogs defeated Lipscomb 2-1.

The seven Razorback soccer seniors finished with 23 of the team’s 51 goals, 30 of the team’s 45 assists and 76 of the team’s 147 total points. But after a dominant finish to their careers, the seniors must look ahead to life beyond the pitch and leave the program in good hand

Over the past five seasons, Razorback soccer’s identity has changed completely. What was once one of the weakest teams in the Southeastern Conference is now one of the strongest.

“When I came to the program, we hadn’t gone to an SEC Tournament in 13 years,” senior midfielder Lindsey Mayo said. “Arkansas was the team that everybody counted as a win on their schedule before the season started. That was kind of disheartening. Now, we’re leaving it where people don’t want to play us. Leaving that behind, in comparison to how I came to this program, it gives you a sense of pride.”

This year, not only did the team reach the SEC Tournament, they were one overtime goal away from taking home the SEC Championship.

Mayo said this season was different for her.

Her attitude toward her last chance helped lead her team to victory all season with a team-high 10 goals scored.

Senior goalkeeper Cameron Carter spoke on the kind of example she wanted to set for the younger players.

“When (last year’s) seniors left and it was time for us to step up, I think we were more the (type of) people that led by example and not so much of a talking class,” Carter said. “We put out the hard work and everyone would have to follow us.”

Senior forward Alexandra Fischer said that the mindset of the senior class was to better the program.

“I think it’s always been our mission, as a class, to kind of leave (the program) better than how we entered it,” Fischer said. “What was molded and shaped into our class was a high level of character, and I think that we can all confidently leave and say that we left this program sticking true to our values and our morals, and we built a foundation that the program’s always going to grow off of. It was important for us to leave the program knowing that we’ve left a lasting impact.”

The team won ten games against SEC opponents, started the season at 13-1 and held a ranking of No. 9 during the season, all program records. The season was capped off after Arkansas made it to the second round of the NCAA Tournament.

After four years on the team, spectators got the opportunity to see the seniors grow not just as athletes, but as people.

“Being an athlete, I heard it described this way: ‘I learned about life with a ball at my feet,’” Mayo said. “Soccer and the athletic environment teaches you not just about sports, but about life, and how to handle hardship, adversity, success, victory and how to deal with people. And I think that’s a skill that I treasure highly. And that’s something that this program and this school emphasizes is leadership and personal development. Athletics definitely helped shape that.”

Senior midfielder Claire Kelley reflected on a question she was asked before her freshman year.

“You’re going to have success and hard times, and our class can attest to that,” Kelley said. “We’ve been through all of it. We’ve seen really high levels of success, and last year we didn’t even make the SEC Tournament. When you have 20-something people that you rely on and that are there for you, it helps you get through anything.”

The seniors also have a unique perspective on Hale’s growth.

“One thing I think he’s gotten a lot better at, and he’ll acknowledge it, is patience,” Mayo said. “And that’s something that everyone grows with as they go through life.”

The players said Hale has also gotten better at learning how each individual player’s needs are different. He’s become better at focusing on the individual, not just the team’s needs, they said.

“I think he’s grown a lot in just knowing what our individual strengths and weaknesses are,” Carter said. “He held us to a high standard when we came in, and after a while he figured out, like, ‘OK, she can do this much, but she’s weak in this so we need to work in this area.’ So he started being able to weave in and out of us and let us get better at certain things.”

With graduation and loss of eligibility comes different experiences and decisions for seniors.

Kelley, a marketing major, hasn’t made her decision yet. Carter will try her hand in the draft, and, if she isn’t selected, she looks to take on a graduate assistant position. Fischer plans on attending physician’s assistant school in the next year and pursuing a medical career. Mayo has accepted a job in a slightly less traditional path.

“I am going to be moving to Huntsville, Alabama, to work for Kord Technologies,” Mayo said. “I’m going to be working on rockets for NASA. I graduated this past May with a double degree in chemical engineering and physics. The company I’m working for is a sub-contractor, so they’re basically going to contract me out to Boeing, which is working on NASA’s newest rocket. I’m actually a rocket scientist.”

Next season, the Hogs will look to improve on their historic season by returning an impressive young roster. The team will return to the pitch next August.