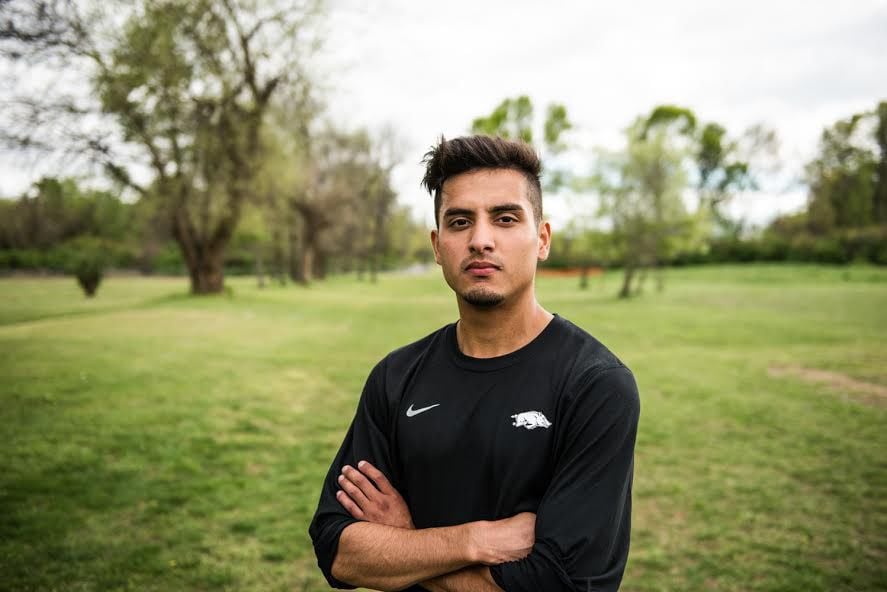 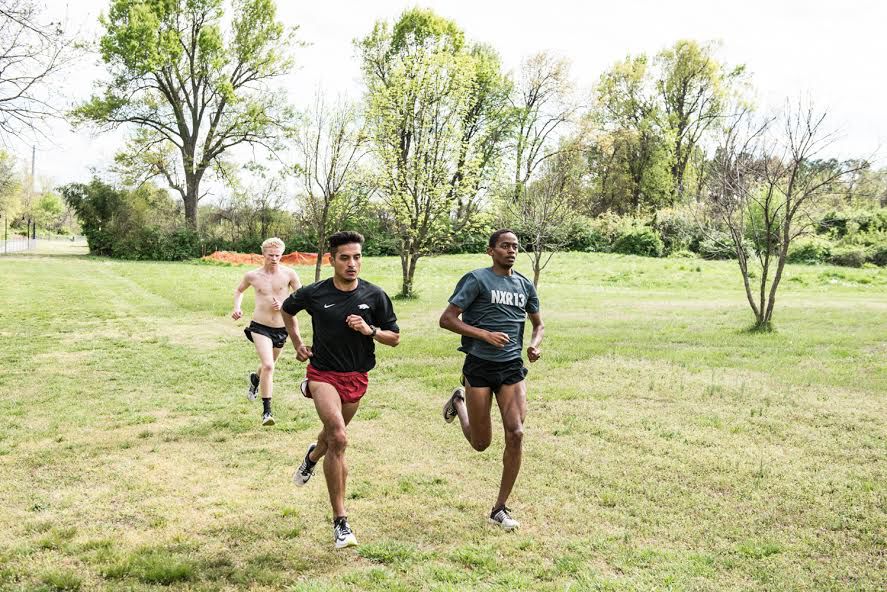 Springdale native Gabe Gonzalez has made the NCAA Cross Country All-Region three years in a row and holds a personal-best time of 20:10:00 in the four-mile.

Springdale native Gabe Gonzalez has made the NCAA Cross Country All-Region three years in a row and holds a personal-best time of 20:10:00 in the four-mile.

Arkansas Razorback track and cross-country teams have trained and produced many legendary professional runners, some of which have gone on to run for well-known brands, participated in the Olympics and saw induction into the Arkansas Sports Hall of Fame.

Gabe Gonzalez has earned a place among the greatest runners at Arkansas. At age 23, he holds the ninth fastest 5,000-meter time for indoor track in Arkansas history at 13:45, along with many other achievements. However, come May 13, he will not be able to walk down the stage at Bud Walton Arena to get his Bachelor’s degree because of an outdoor track scheduling conflict.

Gonzalez sits on the ground, legs outstretched and resting after his long Sunday run as he talks about how far he’s come and where he sees himself after graduation. A UA senior and cross-country and track and field athlete, Gonzalez has always been involved in sports. In junior high, he was on the football, track and basketball teams. His sophomore year of high school he was in basketball and track, dropping basketball the following year and adding cross-country in its place.

“If you’re good at distance running you do both,” Gonzalez said.

Athletes like Gonzalez are constantly juggling their training, events or games and school.

“It’s really difficult; you have to balance traveling every weekend, practice and doing homework every night,” Gonzalez said. “You have to learn how to manage your time and prioritize.”

There are three seasons of cross-country and two seasons of track: indoor and outdoor.

A typical day for Gonzalez starts off with a morning run, morning classes, lunch at the athlete center, afternoon classes, practice from 3-6 p.m., followed by dinner and homework. Practices aren’t just running-oriented, but include weight, conditioning and recovery if a runner is injured.

“You really don’t have free time. The only days we have off are Sundays, but even then you still have to run,” Gonzalez said. “You can’t be up late partying, or whatever, like regular students.”

Being a full-time student and involved in three different sports while maintaining good grades can be difficult, as each requires time and dedication.

“I had more opportunities in track and cross-country,” Gonzalez said when asked why he chose running over football and basketball, adding that he didn’t want to risk getting injuries from the other sports.

“He’s like a father figure to me. He changed my perspective on many things and opened me up to more opportunities after high school,” Gonzalez said. “He gave me confidence, made me believe in myself and that I could have a better future.”

The two still keep in touch frequently and Lassiter would attend almost all of Gonzalez’s meets when he still lived in Arkansas. Lassiter encouraged Gonzalez to get a college athletic scholarship, which led him to attend the University of Kansas his freshman year.

Gonzalez was redshirted as a freshman and ran in five of the six races; he was all-region honors at the NCAA Midwest Regional.

“They have a bad coaching philosophy, and are very strict and uptight,” Gonzalez said regarding some of his reasons for leaving KU. The UofA has more opportunities and a better program overall, he said.

“It’s more relaxed here, and there’s a ‘do what works for you’ philosophy, but at the same time it’s more of a championship-oriented environment because you’re contending for nationals every year,” Gonzalez said.

Having the right mentality and philosophy is a big part of being a good runner.

“You got to have the right philosophy behind it (running). You have to find the right one that’s for you,” Gonzalez said.

Overtraining, burning out and running lots of miles really fast are examples of bad running philosophies, he said.

“I listen to my body,” Gonzalez said. “In running and during training you have to listen to your body, so you won’t get hurt.”

The mindset of a runner is very different from that of another athlete’s.

“People think ‘go hard or go home’ for other sports,” Gonzalez said. “You can’t think like that as a runner or let your ego or emotions drive you.”

Runners have to be really critical and careful about what they eat and what they do to their bodies.

“You’re doing 80-90 miles a week, so you have to constantly take care of your body,” Gonzalez said.

Gonzalez’s dedication and hard training has led him to many accomplishments in both cross-country and track and field. He is a three-time NCAA cross country all-region contender, he is a two time all-Southeastern Conference cross-country team member and placed 48th in 2015 NCAA cross-country championship. His accomplishments in track and field have included 12th place in the 5,000-meter indoors at nationals, six-time all-SEC team member and part of the second team All-American indoors in 2016. Gonzalez also has a 10K personal record of 29:04 and a 5K personal record of 13:45.

“I like the lifestyle where you have to be dedicated,” Gonzalez said when asked what he likes about running. “It’s an individual sport where everything falls on you.”

Running has given him a higher self-esteem and a healthier lifestyle, he said.

“It makes me feel good, physically and mentally,” Gonzalez said.

Traveling to different places and meeting a lot of people are also other perks of running, Gonzalez said.

“I prefer cross-country because it’s more team-oriented and running around a track sucks. I like running outdoors,” Gonzalez said when asked what sport he likes better.

Gonzalez is able to share his experiences and knowledge with his teammates through his position as cross-country team captain and one of three track team captains.

“Gabe is a great friend and like a brother to us,” former UA runners Stanley Kebenei and Kemoy Campbell said.

Both teammates recall the time Gonzalez invited them over to his family home in Springdale for Thanksgiving dinner in 2014. Kebenei, who is from Kenya, and Campbell, who is from Jamaica, were not able to go home during the break to be with their families and were going to spend the holiday alone.

Gonzalez’s advice does not stop with teammates, but extends to some of his social media followers. High school and recreational runners will ask him for advice on how they can drop their running time or let him know that he is their inspiration.

After graduation, the season is still ongoing for runners. Unlike many post-graduates, who are getting ready to start their entry-level job or travel, Gonzalez still has training and races to attend. With Nationals on June 10, you will find Gonzalez and fellow UA runners training in the hopes of placing and making great race times. UA seniors like Gonzalez, who are graduating this May, will not be able to attend their own graduation. Instead they will be running at the SEC outdoor championships in Tuscaloosa, Alabama on May 14.

Gonzalez hopes to land a spot on a professional running team after graduation.

“Right now, my agent and I are negotiating and speaking with different teams and coaches, specifically the West Coast like Portland, Northern California and Arizona,” Gonzalez said. “My goal is to gain more experience from professional coaches and run professionally for as long as I can.”

Gonzalez said he hopes to eventually coach at the collegiate level for the long term.