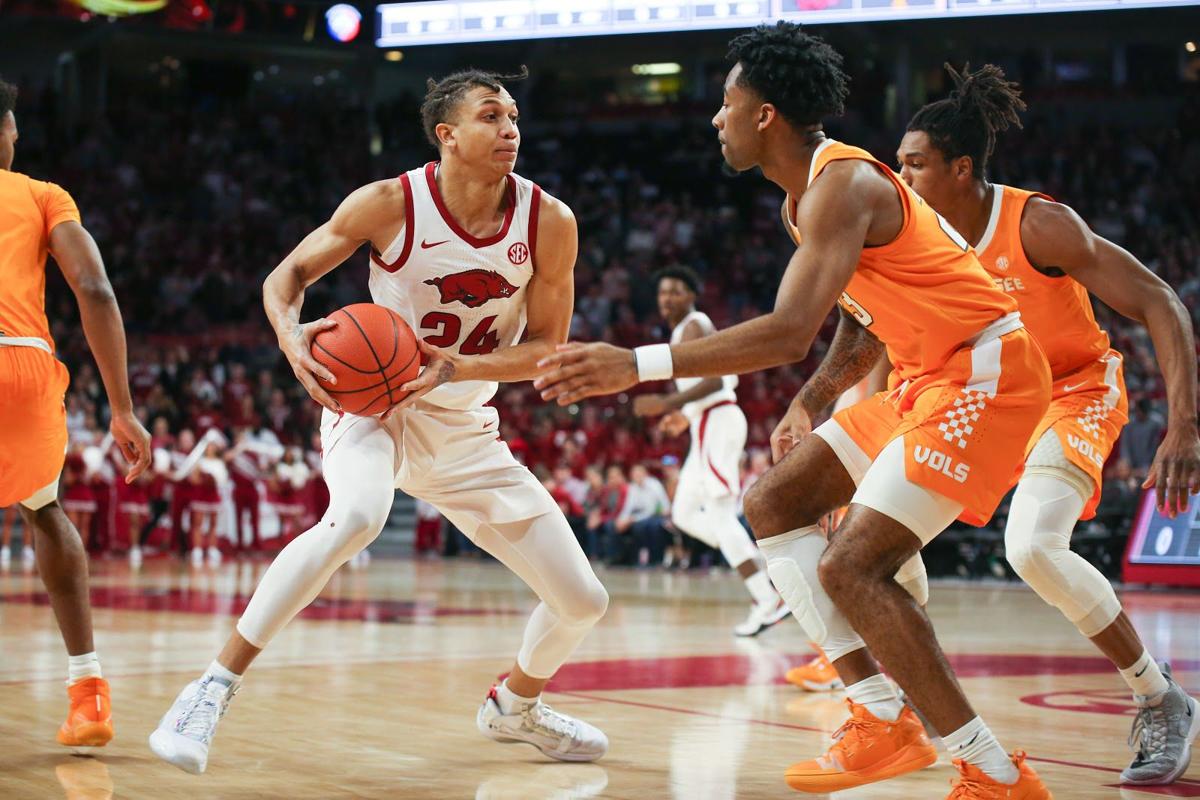 Ethan Henderson, a sophomore, gets a rebound during his second start of the season in the game against the Tennessee Volunteers. The Razorbacks defeated Tennessee 86-69 for their sixth SEC win of the season. 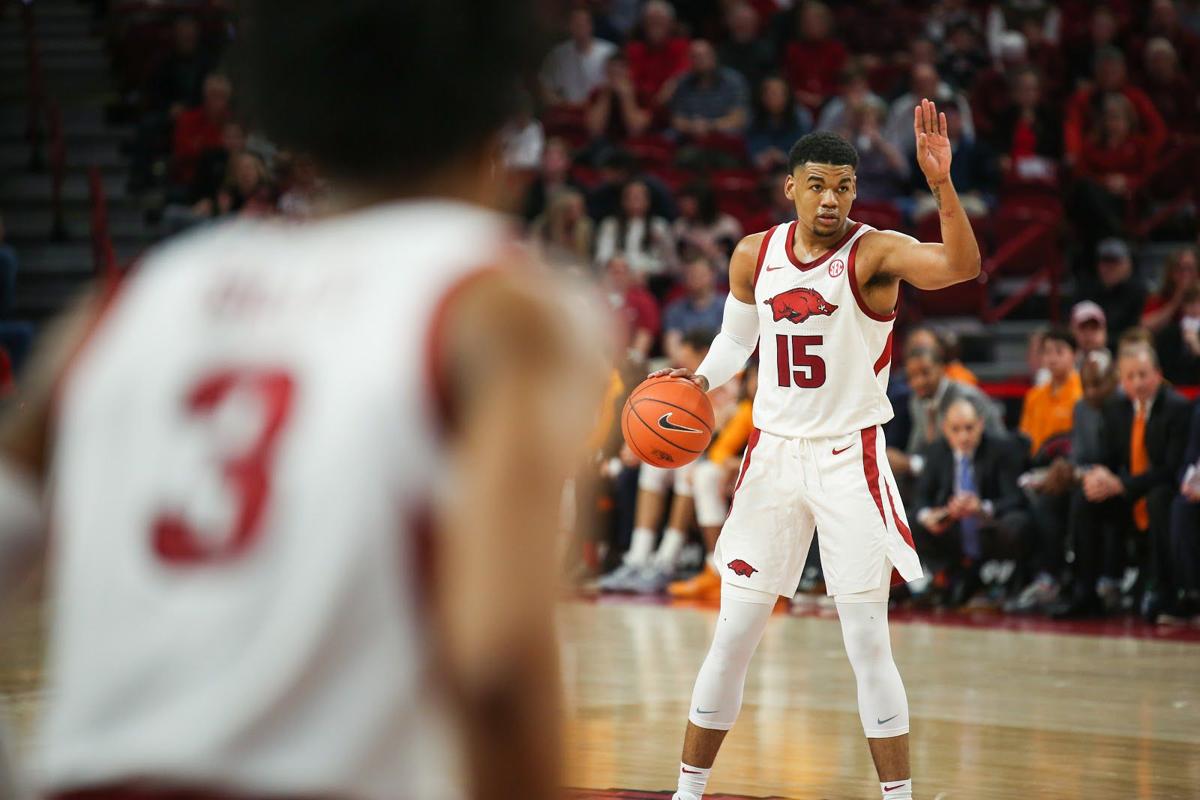 Mason Jones, a junior guard, sets up a play during the game against the Tennessee Volunteers. The Razorbacks defeated Tennessee 86-69 for their sixth SEC win of the season.

Isaiah Joe continued to be the difference maker in the Arkansas lineup as the Razorbacks defeated Tennessee 86-69 after losing to the Volunteers by 21 points earlier in the season.

Junior guard Mason Jones shined once again for Arkansas (18-10, 6-9), scoring 37 points. Joe recorded 22 points of his own, making up for the 21-point difference in the last matchup with the Vols, and sophomore guard Desi Sills had 13 points for the Hogs. Tennessee (15-13, 7-8) recorded 12 turnovers in the game and shot just 23.5% from three.

“[Joe] stretches the floor for them,” Tennessee head coach Rick Barnes said. “Him coming back and doing that, good for them, because they’re definitely a different team with that group and they played well tonight.”

Arkansas shot 2-of-11 from the field in the first six minutes of the second half and allowed Tennessee to bring the game to within two points. The Volunteers opened the half on an 11-2 run.

With 12:28 left in the game, sophomore Ethan Henderson got fans on their feet with a blocked shot in his second start of the season. On the ensuing Arkansas possession, Joe drained a three to put the Razorbacks up by double-digits again.

With 7:20 remaining in the game, Jones hit his second 3-pointer in a row to eclipse the 30-point mark for the SEC-leading seventh time this season and gave Arkansas a 70-54 lead. After the rough start offensively, the Razorbacks managed to get their shooting percentage up to 52.4% by that point in the half.

After shooting 7-of-9 in the half, Jones had to come out of the game with four fouls at the 4:41 mark. The Hogs struggled without him, as they did not score a basket and allowed Tennessee to score four straight points before he re-entered the game.

The Volunteer’s leading scorer with 19 points, senior Jordan Bowden, fouled out with 1:51 remaining in the game to put a bow on the Razorbacks’ sixth SEC victory.

Arkansas ended the game shooting 48.1% from the field while Tennessee shot 44.4%. The Hogs were out-rebounded 31-28, but recorded five less turnovers than the Vols. The Razorbacks recorded 24 points off of turnovers compared to just nine by Tennessee.

“I thought we played with great pace,” Razorback head coach Eric Musselman said. “Although Tennessee didn’t have a high volume of just 12 turnovers, we turned those into points. I thought that was really a key to the game.”

Arkansas went scoreless in the first two minutes of the game, but Jones hit a two-point jumper to put the Hogs on the board. After getting the nod to start, Henderson played well early, bringing down four rebounds and getting a block in the first four minutes.

“We knew what [Ethan] could bring us,” Jones said. “It was just the fact that the coaches started to trust him and Ethan finally trusted himself and trusted his work.”

With 15:58 remaining in the first half, Arkansas led the Volunteers 13-1. Two free throws from Jones gave him 1,000 career points and put the Hogs up by 12. The Razorbacks out-rebounded Tennessee 8-2 in the first four minutes of the game.

Through the first 10 minutes of the first half, Arkansas outscored Tennessee 24-9 and shot 44.4% from the field compared to just 30% from the Volunteers. Sills started off hot, entering the game and knocking down two of three shots from behind the arc.

The Volunteers went on a quick 8-0 scoring run at the 8:31 mark that brought them within seven of the Hogs, but Arkansas countered by scoring five straight. After pulling down eight rebounds in the first four minutes of the half, the Razorbacks finished with just 14 rebounds in the first half.

The Razorbacks led Tennessee 40-27 at halftime. Jones led the Hogs with 15 first-half points. Arkansas shot 46.2% from the field in the half, and the Volunteers shot 37%. Tennessee recorded nine first-half turnovers compared to just three by the Razorbacks.

The Razorbacks will travel to Athens, Georgia, to take on the Georgia Bulldogs (14-14, 4-11) at 5 p.m. on Saturday. The Bulldogs lost to South Carolina 94-90 in overtime Wednesday night. The game will be aired on the SEC Network.