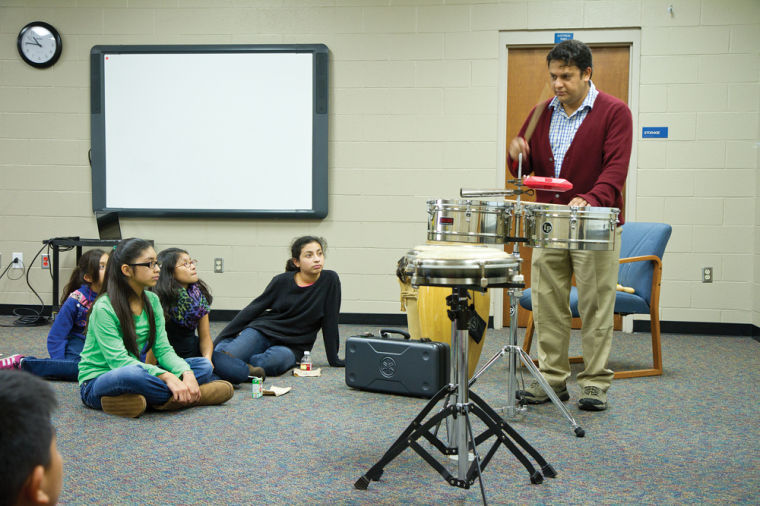 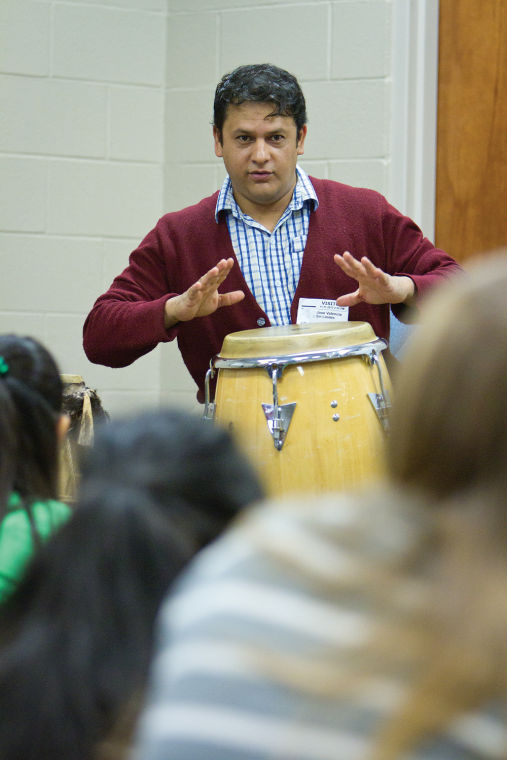 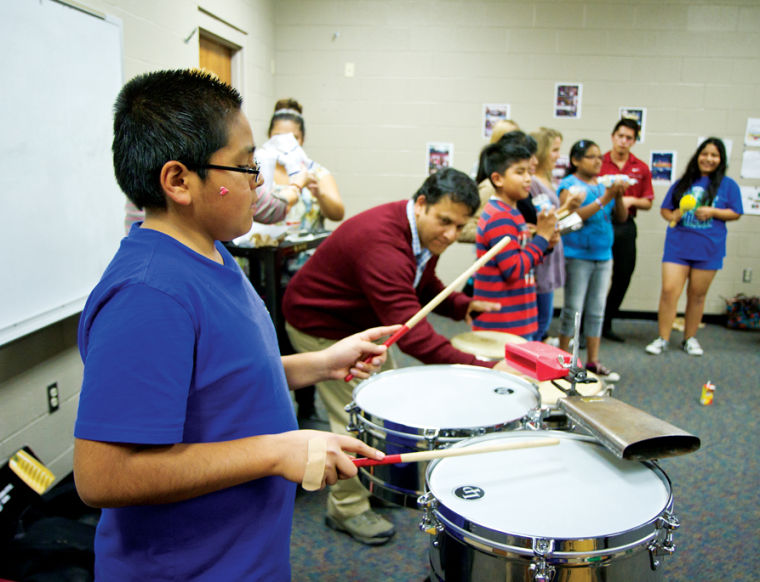 After the final bell rings, most students at J.O. Kelly Middle School in Springdale rush towards the parking lot and the buses. As the crowds head for the exits, UA senior Sarah McNeal sits on a couch outside of the office at the front of the school as a crowd gathers around her.

McNeal and her classmates work with Latino students in Northwest Arkansas as part of the Sin Limites service project. Students who volunteer with Sin Limites, which means “limitless” in Spanish, commit to spending at least 20 hours a semester working with Latino children to improve Spanish fluency, both spoken and written.

To improve Spanish skills, the program includes reading, writing and speaking practice interspersed with activities like cultural lessons in dance and music.

Today, the students walk back to a common area where copies of “Doña Flor,” a picture book by Pat Mora about a benevolent Mexican giantess, are spread out on the floor.

From the front of the room, Jeanette Arnhart gives directions to the 12 middle school students and the UA student volunteers, all in Spanish, of course. Arnhart, who is working on her Ph.D. in interdisciplinary Hispanic studies and comparative literature at the UofA, coordinates the program and teaches the lessons.

The students sit in groups and describe the character traits of Doña Flor and define unfamiliar words. At the end of the session, Arnhart surprises the kids. They can keep the books, a gift from the UA Spanish department.

The kids scramble from mentor to mentor, having them sign the inside cover. After a round of hugs, the kids get on a bus to go back home.

Arnhart, originally from Siloam Springs, worked for many years as a Spanish teacher in Rogers Public Schools. While she was teaching in the mid-90s, the first wave of Hispanic immigrants arrived in Northwest Arkansas, Arnhart said. Many were from rural areas of Mexico and Central America and sought employment in the region’s poultry processing plants, according to the Encyclopedia of Arkansas History and Culture.

Spanish language skills follow the opposite trend. For first-generation Latino youths, 89 percent can speak and read in Spanish, according to the Pew Hispanic Center. Just one generation later, 79 percent of Latino youth speak Spanish and 68 percent can read in the language.

This changes drastically by the third generation, of whom only 38 percent can speak Spanish and a mere 26 percent can read it.

In response to these trends, UA Spanish professor Dr. Luis Fernando Restrepo started the program in 2011, with the first classroom interaction in the spring of 2012. Fernando modeled the program after Razorback Writers, which teaches an integrated arts curriculum in area schools.

Fernando said that Sin Limites tries to fill in the gap between Spanish at home and formal academic study, which is available to students starting in junior high. Fernando, himself a father, is raising his children to be bilingual and biliterate.

“It has been challenging as a parent trying to raise bilingual children here... with no institutional support,” Fernando said. As a university professor, Fernando said he has access to resources and travel opportunities that are not available to all Latino families.

The cultural empowerment is important, but Sin Limites also has utilitarian goals. Fernando said that there is a strong cognitive benefit associated with biliteracy. Also, the literacy skills in a student’s native language transfer over to the student’s second language, in this case English. Both Arnhart and Fernando agreed that the program is also meant to give Latino students in the area a better shot at attending college.

The service project is available to all UA students as a Spanish course for those who meet the prerequisite requirements. The current college students are there as mentors, reminding kids that college is an option for all students, regardless of ethnic background.

UA senior Magdalena Arroyo came to Rogers the year she started kindergarten via the Mexican state of Michoacan and Lompoc, Calif. While she learned English in school, her mother emphasized Spanish at home by reading to her.

Many Latino students feel guilty speaking Spanish in schools, Arroyo said. If students cannot speak the language, they risk losing the link to their culture.

“[For Latinos], language is such a big part of our culture and it makes it hard for us to fully grasp our roots with the absence of Spanish,” Arroyo said.

UA senior Irma Bredekamp said speaking Spanish was not something to be proud of in the towns she grew up in Texas and Oklahoma. She said her favorite moments as a mentor are watching students take pride in their heritage and gain self-identity by speaking the language.

Recently, Jose Valencia, a UA music department faculty member, visited J.O. Kelly to teach a brief overview of Latin music. The students listened to Andean music from Peru, bachata music from the Caribbean and modern Latino artists like Shakira from Colombia and Prince Royce, a Dominican-American singer from New York. Valencia makes a point to highlight the diversity in the music––the drums from Africa, the guitar from Spain and the pan flute from the Incan civilization.

Valencia also brought a host of percussion instruments. Some were familiar, like maracas. Others, like a drum from Valencia’s native Colombia, were less recognizable.

The entire room full of middle school students got the chance to play in Valencia’s impromptu rhythm section, producing a cacophony with a distinctly Latin sound.

Arnhart hopes that the emphasis on cultural literacy snowballs in Northwest Arkansas. She said that there are already some parents who sit in on the sessions. At Grace Hill in Rogers, Sin Limites is hosting a parents’ night.

For Arnhart, this kind of cultural understanding has been her life’s work. As for the program, enrollment is growing at J.O. Kelly. At the beginning of the school year, around 10 students came to each session. Now, attendance is up to 30.