Skip to main content
You are the owner of this article.
Edit Article Add New Article
You have permission to edit this article.
Edit
Home
News
Sports
Lifestyles
Opinion
Multimedia
Apply
Subscribe
COVID-19 DASHBOARD
1 of 4 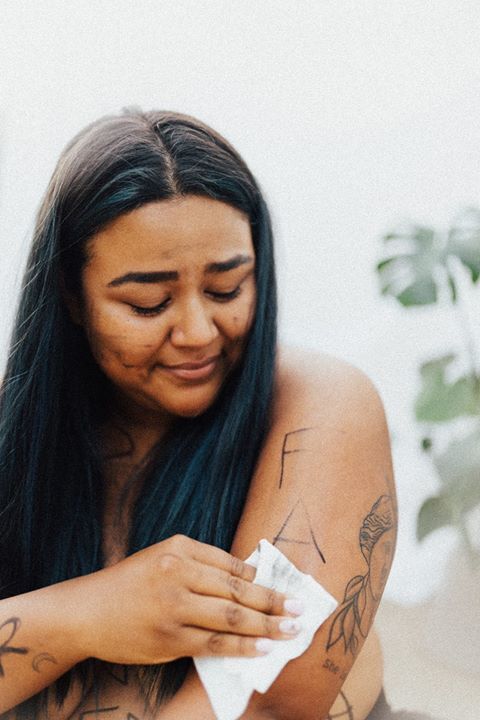 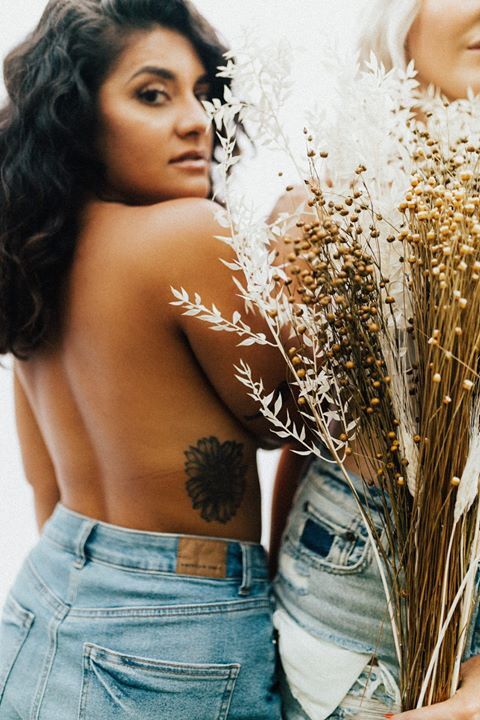 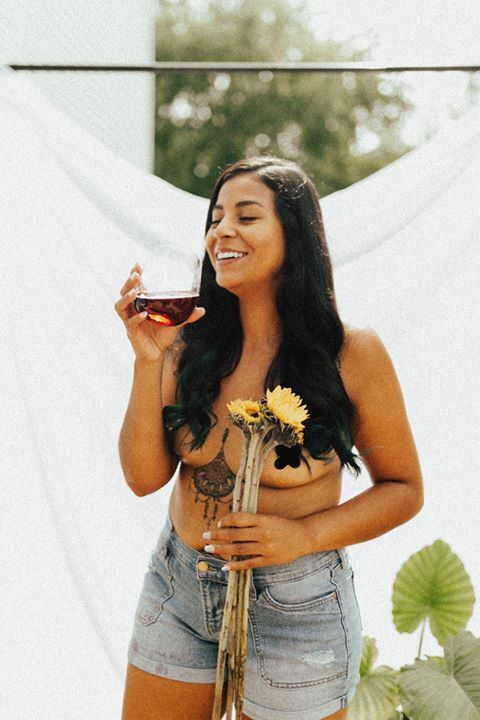 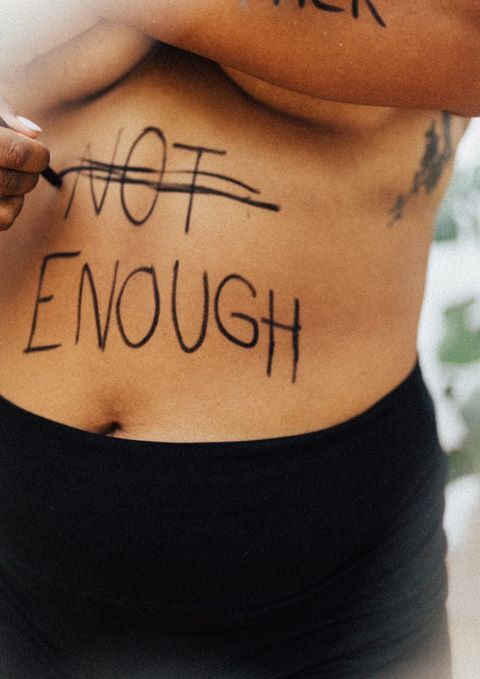 It was a hot August afternoon when 23-year-old Elizabeth Salazar sat down by herself for a photoshoot in her backyard. She turned a tube of black eyeliner not toward her large brown eyes but her bare torso and scrawled the words,“HATE MYSELF,’ “FAT,” “NOT ENOUGH,” “BEANER,” and finally, “POOR.”

Salazar is a bank worker by day and a photographer in her spare time. The late August shoot was the “end” of a series that she started brainstorming during the spring.

With the weight of the pandemic and everything else going on in the world, Salazar was going through a hard time mentally and was looking for ways to get creative with her photography during quarantine. In a society that is so tuned into social media and people’s perfectly curated online lives, a series celebrating real women and their bodies was a perfect fit for her project.

Salazar started talking with her best friend, Evelin Herrera, about her idea to photograph women’s bodies in a way that celebrates them for all that they do.

“I wanted to photograph women’s bodies because women’s bodies are not given enough credit for what they do,” Salazar said. “They bring children into this world. They give life.”

She wanted to do something real and portray authentic stories instead of those curated bloggers on social media, Herrera said.

From late July until the end of August, Salazar took around 800 photos for her body positivity series.

That desire to showcase the strength and beauty of women’s bodies has turned into a series that is only continuing to grow. Before she knew how the project would affect people and that it would turn into something that people requested, Salazar knew that she had to turn the camera toward herself and to share her side of things.

Her long, dark hair is loose and falls around her shoulders as she uses a stick of black eyeliner to put her emotions on to her skin in the photos she posted to close out the series on Aug. 24 They show a serene Salazar, in the backyard of her home in Rogers, Arkansas. A home she has created with her boyfriend who has helped her feel loved and beautiful on her journey to self acceptance and appreciation.

Salazar started to cry as she wiped the words from her skin, leaving stains from the makeup. They were happy tears though, this is the raw emotion that she wanted to share with her followers.

“Wiping them off is me saying, ‘No more, this it, it ends now,’” Salazar said. “I can’t be pushing positivity into the world if I’m not doing it to myself.”

That emotion is the essence of a project that was once a crazy quarantine idea.

Herrera, a 25-year-old hair stylist and Salazar’s best friend, modeled for a shoot in the series with photos that show the beauty of being a young mother. Herrera thinks that people are not vocal enough about the pressure social media puts on people and the way they look.

Salazar’s work is showing a side to social media that so many do not get to see.

“I was very proud of her for it,” Herrera said, “Social media does kind of put a cloud over our heads with the idea of what we should look like and that’s not okay.”

Herrera does not want her daughters to feel like they have to look a certain way because social media is telling them to.

When Salazar looks at her Instagram profile and goes to the pictures from her body positivity series she finds countless women commenting, expressing their love for the series and resonating with the quotes shared. Sometimes she will open her direct messages to find girls sharing their similar experiences.

Those emotions are what fuel the series.

Jennyfer Grande, a 26-year-old from Springdale, is another friend of Salazar’s who modeled for a shoot for the series. Grande never thought she would be posing topless for a photoshoot, but Salazar is the type of person who can make it happen and make people comfortable during a vulnerable situation, she said.

“Working with her is like a different feeling,” Grande said. “She is really, really good at what she does.”

Making sure that the models are comfortable and feel empowered is the goal for Salazar. She plays the music they love, she shares her vision of the shoot with them and she always shows them the photos to see if there is anything they want to change.

Grande went completely topless for the shoot, but felt comfortable and confident the entire time with Salazar behind the camera. Instagram does not technically allow nudity on the app, but it is nothing that a few well placed flowers or a wave of dark hair cannot fix.

“I was just really proud after that,” Grande said. “I almost got emotional when I was in the session with her.”

Seeing the response on social media after Salazar posted the photos was a great feeling for Grande, and it reminded her that it is okay for everyone to look different and reminded her of the whole point of the series.

“The vulnerability that they have shown me, it just doesn’t compare to anything else,” Salazar said.

Burge went into the shoot scared, but knew it was not something she should miss out on because of that. Salazar sent her around 80 photos from the shoot only a few hours later, Burge said.

“These parts of my body that I would normally hide, she showed them in a new light for me,” Burge said.

The photos helped show that the parts of her body like the scar on her face do not take away from her beauty— they tell a story, Burge said.

The emotion that her models and friends felt is something Salazar related to as well. Body positivity is a journey that Salazar has been on for years.

“Growing up wasn’t always the easiest,” Salazar said. “I didn’t have the most supportive family that encouraged me to love myself or made me feel better whenever I felt down.

Salazar thinks that diet culture is big in the Hispanic community.

“I constantly had family members telling me that I should go on a diet because I was getting too big or that my weight wasn’t where it should be as a kid,” Salazar said. ‘I was constantly in my head. Even all the way through high school I didn’t love myself.”

It was until Salazar started breaking away from the people who did not support her that she began to find and accept herself.

Her journey to self love has been long and hard, and she knew that those last photos in her series had to mean something, Salazar said.

Her work has not stopped there though. Salazar has had multiple women reach out to her about booking a women’s empowerment shoot. With four of those minishoots under her belt in the last week of September alone, it does not seem that the project she dreamed up in her home only a few months ago will stop soon.

It is evolving, Salazar said. What started out as a body positivity project has transcended into something bigger— empowerment, strength, courage and independence.

Supported by the women who have bared their skin and their stories to her, and by herself, Salazar is moving forward. She is currently working on a Black power series and hopes to start a series that focuses on the Hispanic culture soon.