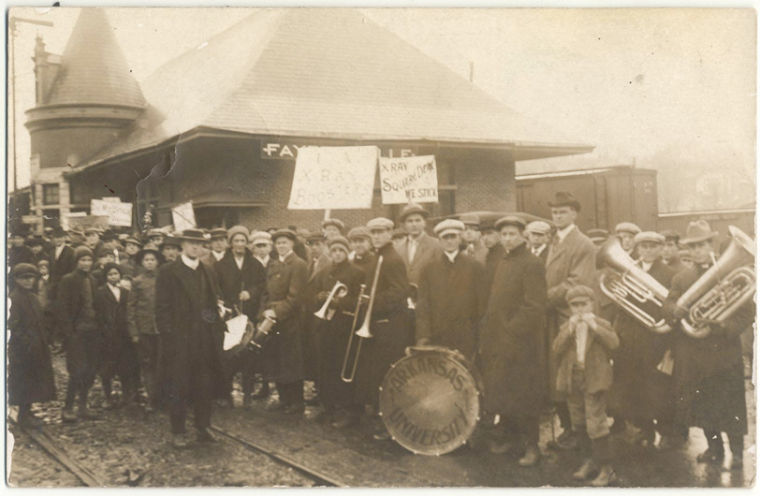 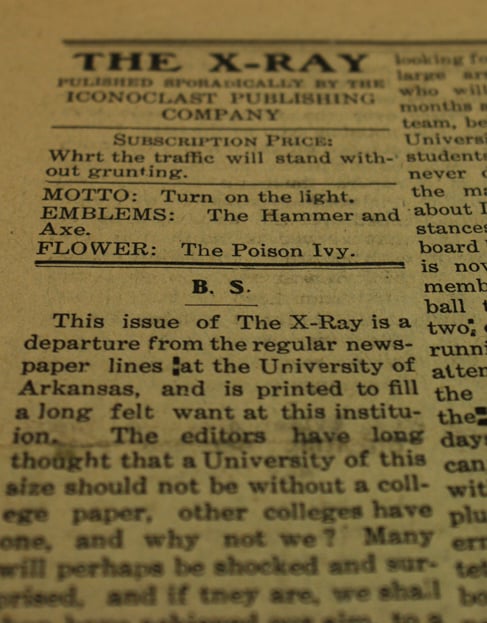 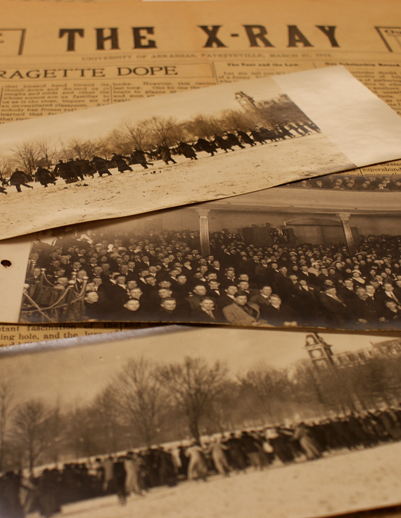 Even as they lifted the newspapers from the cradle of the printing press, and ran their fingers along the delicate edges, and stacked and bound them for distribution, the students knew they were violating UA policy.

These 36 students had created an underground student newspaper, which they called The X-Ray, and they had filled its pages with snide, bald-faced criticisms of city and school administrators.

It was a snowy Saturday morning when the first copies hit campus. Within two days, all 36 of its creators were expelled.

That was 100 years ago tomorrow. The incident rapidly escalated into a heated standoff between faculty and the entire student body. It divided the city and changed the landscape of university leadership. It remains the most dramatic student protest in UA history.

“Things are in one more row around this place,” wrote UA senior Lilbourn Hays Meriwether in a letter to his father back home in Paragould, Ark. Meriwether was the editor of The University Weekly, a predecessor of The Traveler.

“It looks to me like a case of either fire the faculty or the students,” he wrote.

The X-Ray was the culmination of a discontent that had been boiling up for years among a group of highly involved upperclassmen. The subheading read: “The Paper Without A Muzzle.”

The paper did what the faculty-controlled University Weekly could not – it aimed to correct university failings by condemning everything from campus litter to favoritism among discipline and scholarship committees.

It was a humiliating blow to the university’s reputation.

“This paper has as its aim the tearing down of the old and flagrant abuse at this institution and to help her enter a new era. Many will perhaps be shocked and surprised, and if they are, we have achieved our aim,” the editors wrote.

“As real teachers and inspirers of men and women, we have some of the finest NEGATIVE specimens in captivity. Instead of being able to unfold a subject and make it vitally interesting, they seem to have an ingrained knack of making it repulsive and impregnable.”

The editors were sometimes brash and prone to hyperbole.

“The city of Fayetteville has a reputation that no other city enjoys or desires to enjoy. She has the nastiest, muddiest, filthiest, dirtiest and most ill kept streets in the country.”

“While we are too poor to keep our campus looking neat at a nominal cost, we are able to build ten thousand dollar tracks and football fields that are never used.”

The publication was a stinging public embarrassment for the administration, and it especially infuriated UA president John Tillman – The X-Ray was not only disrespectful, but a violation of a 1905 law by the board of trustees that banned “unauthorized publications and assemblages,” according to Robert Leflar’s 1972 book, The First 100 Years: Centennial History of the University of Arkansas.

The faculty faced a difficult decision that afternoon. The editors of The X-Ray had printed their names plainly and defiantly on the paper’s masthead, and they included several baseball stars, prominent debate students and the captain-elect of the football team.

In fact, most of The X-Ray’s editors came from prominent families. Two were sons of members of the university board of trustees. Others included the sons of a state attorney general, a tax commissioner and an associate justice of the Arkansas Supreme Court, according to a 2009 report by Chris Branam.

Initially, President Tillman hoped to avoid controversy by expelling only the ringleaders. But that attempt was spurned by the X-Ray editors, who insisted that each of them carry equal responsibility.

So Tillman was forced to expel them all.

The student body mobilized quickly. By the next day, most of the university’s 724 students had signed a petition pledging to attend no classes until the 36 were reinstated. Only seven students attended class the next day.

“It was similar to a union going on strike against unfair wages from a company,” said Charlie Alison, managing editor of University Relations. “There was very little reason to hold class after they struck.”

The strike was a risky move, and for a few days, the faculty and students were at a stalemate, Alison said.

“There were some tense moments for those who were expelled, who didn’t know whether they were going to have to finish their college careers elsew h e r e," Alison said. “Even those who struck weren’t sure what would happen.”

University Weekly editor Lilbourn Meriwether had known about The X-Ray for some time, but was too afraid to take part in its publication. Meriwether agreed with the views of the X-Ray editors, though, and when the strike began, he joined in, risking his position at the University Weekly and his college education all at once.

“I’m one of those who walked out this morning and it may be I will get canned for it but I certainly won’t be alone,” Meriwether wrote to his father.

“Honestly, nearly every important student in school is on The X-Ray or has walked out. They are not raising any trouble but they are very nicely waiting around to see what’s next.”

What came next spun the matter further out of the university’s control.

The student body lionized the 36 editors, awarding them homemade medals fashioned from tin cans, which they were seen wearing proudly as the UA band led a parade of 500 students to the downtown square and back.

Despite The X-Ray’s harsh criticism of Fayetteville merchants, (the editors complained that textbook prices were too high) many capitalized on the unrest.

“The local merchants, rather than getting mad, turned it around and put posters up in their windows to support the students,” Alison said.

The town movie theaters even offered free admission to students during the strike.

News of these events traveled quickly across the state as students like Meriwether sent letters home. Local photographer Burch Grabill used pictures of the protests on postcards that students sent off to their parents – this prompted sympathetic media coverage in cities like Russellville, Conway, Springdale and Rogers.

The UA now faced a public relations nightmare, and the students weren’t budging.

“The university president and the faculty didn’t want to back down on the expulsion of the 36 students who had published X-Ray, but it looked like the students would not quit striking until those students were readmitted,” Alison said.

It took only a few days before Gov. George W. Donaghey, then chairman of the board of trustees, called for a board meeting with UA faculty and students.

When the governor arrived on Saturday, March 2, 1912 – only a week after The X-Ray’s publication – he was met with vehement arguments from both sides.

President Tillman contended that the expulsions were justified according to the 1905 law. But the students had prepared an eloquent rebuttal. A seven-man committee argued for the reinstatement of the 36 on behalf of the students, stressing that, all along, the intent of The X-Ray had been to improve the quality of the UA.

Impressed, the governor directed the board to issue a statement: the expulsions had indeed been justified by the 1905 law, but that law was now repealed.

“He basically tried to save face for the faculty and the president,” Alison said.

The 36 were immediately reinstated with the promise that the faculty would investigate their complaints. The students’ strike had worked – they had won.

But, at Gov. Donaghey’s request, they held no celebrations, no parties or parades. Instead, the students set out to repair student-faculty relations. On Monday, two days after the board meeting, a student representative submitted a formal request for extra class work, to make up for time lost to the protests.

President Tillman quietly announced his retirement at the 1912 commencement ceremony. Two years later, he was elected to Congress. He served seven terms, according to UA records.

The last official mention of the X-Ray protests appeared in a board of trustees report in January 1913.

“The faculty has acted with wisdom and decision. The action of the board in reinstating the students has not had the slightest effect in making faculty timid in enforcing discipline. Moreover, the students have shown a patriotic spirit in responding loyally to the progressive measures of the faculty.”

The words of The X-Ray editors had proved both powerful and prophetic.

“Public opinion has always been a very potent factor in determining the course of any intended set of events, and we do hope that by bringing public opinion to bear on these evils, they will be remedied, at least in part,” they wrote.