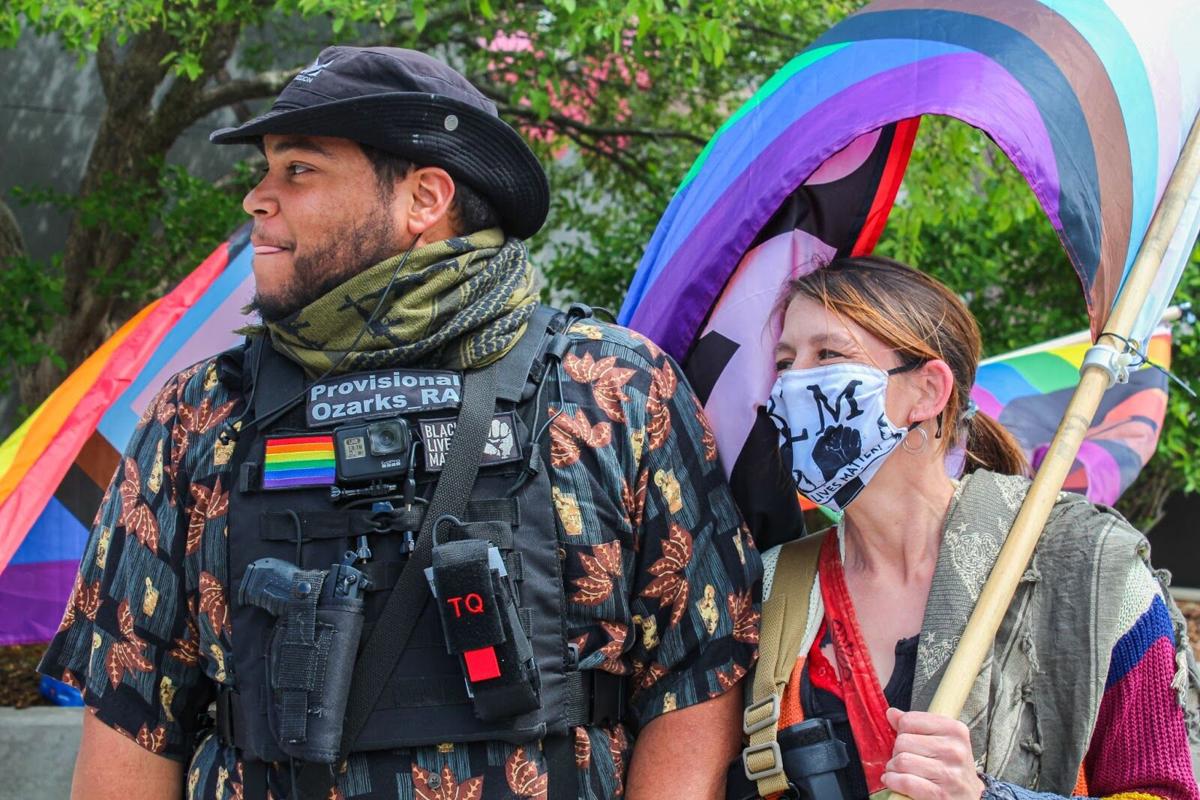 Quinn Foster (left) and their partner, Murphy Foster (right), were two of many that gathered on the Fayetteville Square on April 18 to fight against police brutality and anti-transgender legislation in Arkansas. 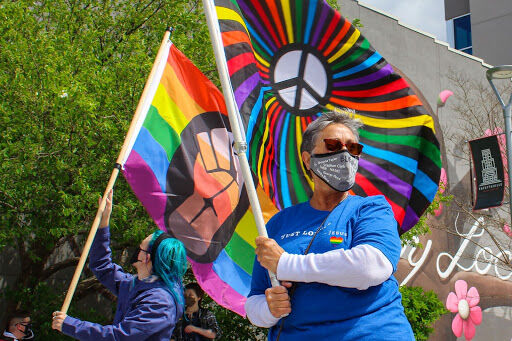 Cheri Wringer, a member of the Ozark Coalition, said she came to show her support of marginalized groups.

Quinn Foster (left) and their partner, Murphy Foster (right), were two of many that gathered on the Fayetteville Square on April 18 to fight against police brutality and anti-transgender legislation in Arkansas.

Cheri Wringer, a member of the Ozark Coalition, said she came to show her support of marginalized groups.

Northwest Arkansas community members danced, waved flags, gave speeches and marched through downtown Fayetteville on Sunday during the ‘Rally for Our Rights’ protest against police brutality and recent attacks on LGBTQ rights.

Members of the Ozark Coalition and Bridge the Gap NWA organized the march following the death of Daunte Wright, a 20-year-old black man shot by police in Minnesota on April 11. The focus of the event was to protest the killing of unarmed individuals for low-level offenses in the U.S., said Quinn Foster, a member of the Ozark Coalition. On the Fayetteville Square, about 10 speakers covered topics like the recent Arkansas anti-transgender legislation and queer rights.

Protesters chanted “No justice, no peace, prosecute the police” as they walked through the streets of Fayetteville. Foster said the event was a message to law enforcement that police brutality should not and will not be tolerated by the community.

“Today, it is extremely important that we show the community, especially in this area of Arkansas, that we don’t tolerate this kind of nonsense and we’re not going to have this kind of behavior from our officers,” Foster said. “If they plan on going out and behaving like this and killing people willy-nilly, we’ll be out here in the streets marching that very same day.”

Chloe Crotty, a UA sophomore, heard about the event through social media and attended to show her support for the Black Lives Matter movement. She said she wants to use her privilege to advocate for the rights of minority groups.

“Although, as a white person, I will never understand what (Black Americans) go through, I want to and I’m trying to do what I can to use my privilege to fight back and let everyone know that their lives matter too,” Crotty said. “It’s not just a social media hashtag. It’s a real issue and a real problem.”

Cherie Ringler, a member of the Ozark Coalition, said she came to the protest to encourage visibility for marginalized groups and inspire change and unity within the community. She wants to advocate for equal rights for all,  and said she has been especially disgusted by the volume of anti-transgender legislation passed or proposed in Arkansas during the current General Assembly session.

On March 11, the Arkansas Senate passed Senate Bill 354, which would prohibit transgender girls from being a member of and competing for public K-12 and college sports teams, with a vote of 28-7. On the same day, the Arkansas House passed House Bill 1570, which prevents transgender minors from receiving gender affirming care such as puberty blockers or cross-gender hormones in the state, with a vote of 70-22. Gov. Asa Hutchinson signed Senate Bill 354 into law March 25 and chose to veto House Bill 1570 April 5, but state legislators overrode his veto the next day.

By attending the march, Ringler had the opportunity to fight for justice with people that share her views, she said. Ringler thinks many people do not see the importance of addressing certain issues because they are not affected by them personally, and she is trying to encourage empathy and awareness, she said.

“The point (of the march) is to get the Fayetteville community to wake up and be aware, and this is one way to do it,” Ringler said. “You can be on Facebook with all your friends and you all think the same thing, but you actually need to show up.”

In addition to the march, Ringler said she enjoyed the music and dancing at the rally because it felt like a celebration of all the different groups present.

Visibility is one of the most important components of rallies, because it helps to garner the community support needed to enact change, Foster said. Foster thinks seeing people out waving flags and protesting in support of their rights also helps community members, including LGBTQ children, to recognize that they are not alone.

“The biggest thing I want to do today is inspire someone to go out and go start their own organization, whether it’s for equality, peace, justice, feminism, women’s rights, (or) queer rights,” Foster said. “We need change in Arkansas. This isn’t working, this is not working for anybody.”