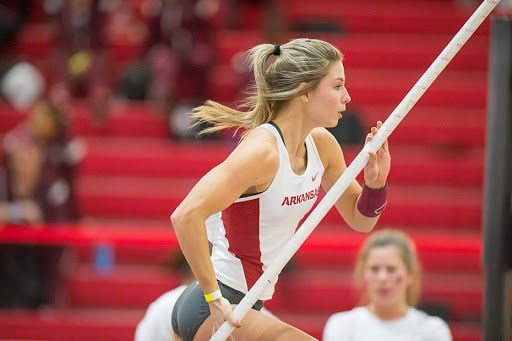 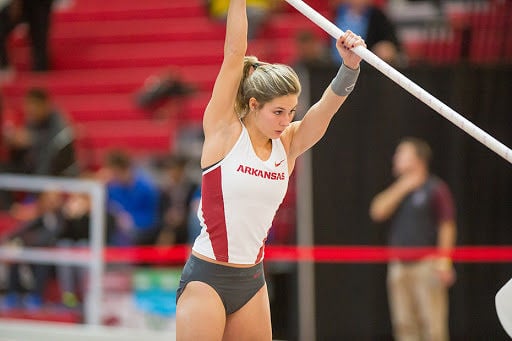 Senior pole vaulters and twins Lexi Jacobus and Tori Hoggard, juggle not only their academics and being Razorback athletes, but their marriages.

Hoggard and her husband Sethl Hoggard, are high-school sweethearts. He was a senior and she was a sophomore when they met in 2013 at Cabot High. Seth went to a community college near their hometown and now owns a restaurant in Conway.

“Eventually, I left for college and we have been doing long distance for four years now and have been three hours away since then,” said Hoggard.

Hoggard said it was not easy to be under the pressure and demands of a student athlete, while balancing a healthy long distance relationship.

“During season it is especially really hard to see each other. There were times when we went a month or longer without seeing each other but we made it work,” said Hoggard.

Hoggard’s twin, Jacobus, found “The One” through the UA track program. Multi-events competitor Derek Jacobus, transferred to the UofA from the University of Northern Iowa as a sophomore in 2017. Jacobus knew it was meant to be when they met, said Jacobus.

“We started talking and we hit it off immediately. We were engaged a year and two months after we started dating and then got married six months later,” said Jacobus.

Since Lexi and Derek were both Razorback track and field athletes, being married only made their relationship easier.

“Being married has made it easier because we get to spend a lot more time together,” said Jacobus.

Derek finished out his last season as a Razorback and is now working at the UofA Little Rock campus as a jumps and multi-event coach.

Both Jacobus and Hoggard have been accepted into pharmacy school at UAMS and plan to attend after their track career ends. The twins still wants to compete in the Olympics and other short-term meets after their collegiate career ends this season.