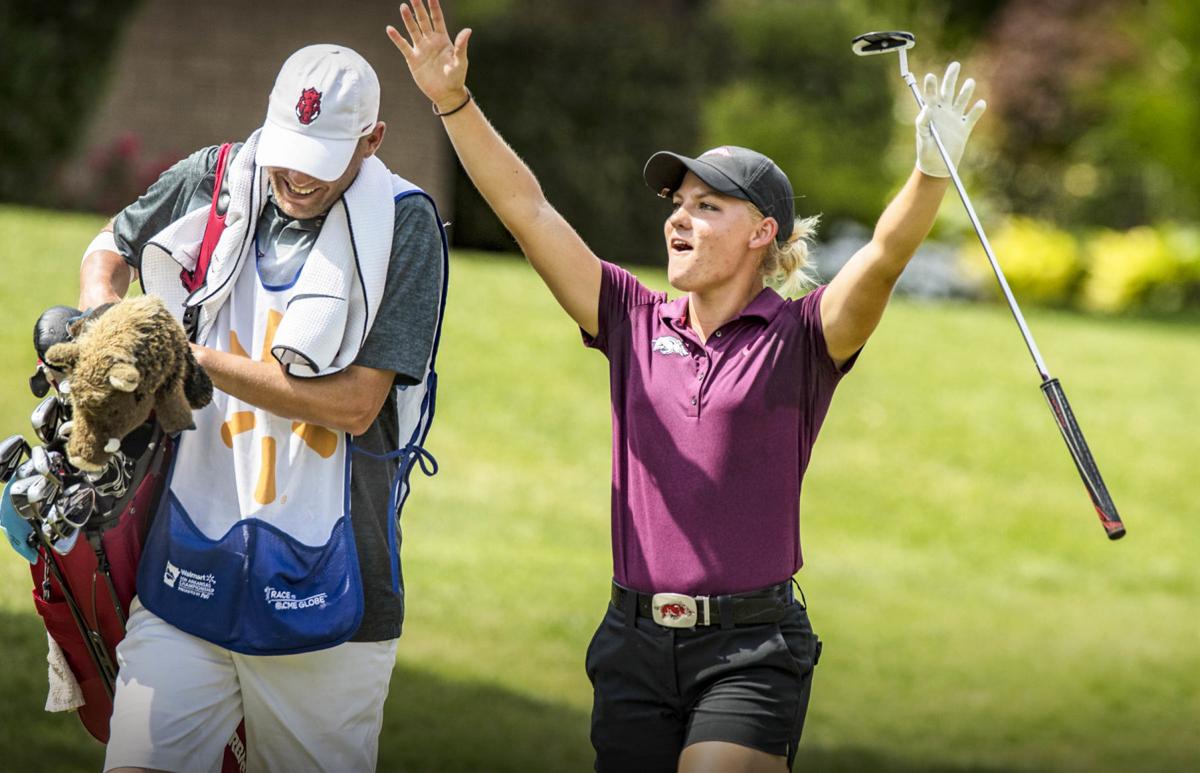 Uriell calls the Hogs with fans at the 2017 Walmart NW Arkansas Championship. As a junior, she led the Razorbacks with a 72.46 stroke average. 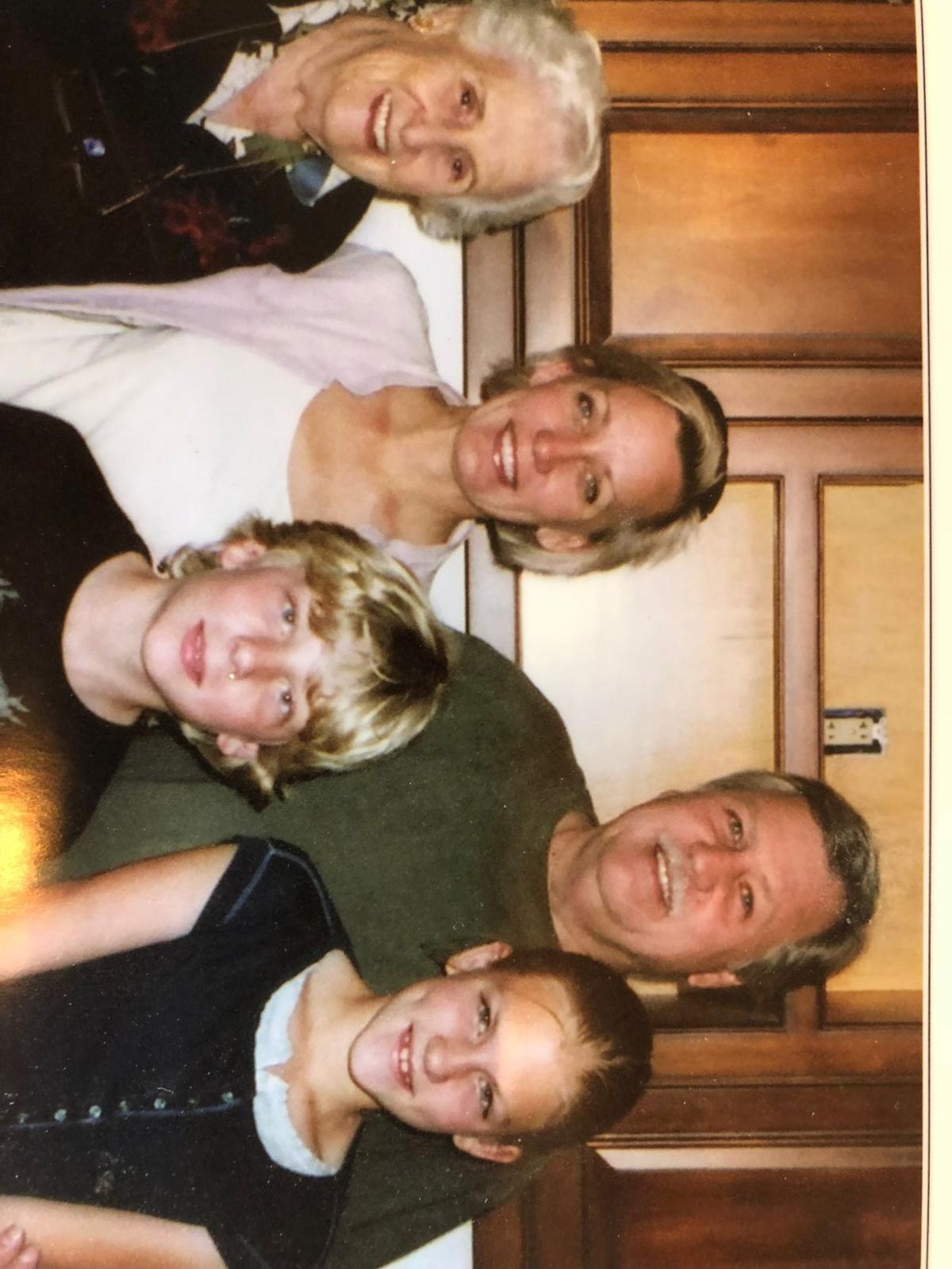 Alana Uriell (right) said the death of her mother (middle, back row) spurred her love for golf.

Uriell calls the Hogs with fans at the 2017 Walmart NW Arkansas Championship. As a junior, she led the Razorbacks with a 72.46 stroke average.

Alana Uriell (right) said the death of her mother (middle, back row) spurred her love for golf.

Senior golfer Alana Uriell does not remember much about her mother's funeral. She recalls sitting in the church with her family. Her dad was reading his wife’s obituary but passed it to her uncle because he was too emotional to finish.

“I remember going to my mom’s funeral and sitting in the front row,” Uriell said. “I don’t even think I heard anything because I was staring straight at the casket and thinking my mom is in there. It was weird thinking I am never going to see her again.”

When Uriell was 14 years old, her mother, Barbara Uriell, died from breast cancer.

She credits her mother for showing her the sport she came to love. When she was young, learning how to play golf was difficult and days of struggle were numerous, Uriell said.

“The reason I started golf was because of her, and she helped me get through the beginning,” Uriell said. “It was hard being a beginner because you never want to go practice because it’s too difficult, but she said we would get pizza after.”

Recruiting was not the easiest process for Uriell. She didn’t think she was going to play golf in college, much less receive a full scholarship to the UofA because she started to play golf at 8 years old, much later than the average golfer begins. She believed she would go to community college because school was too expensive, but Uriell got her chance and wanted to show who she was as an athlete.

While she has enjoyed her time in Arkansas, a long way away from her home state of California, she still misses her mom terribly and all of her items remain in the house, Uriell said.

Her mom passed away on December of 2010. Uriell took a week off from school and went back to class on a Monday. She remembered looking around and thinking no one understands what I went through, she said.

When Uriell’s mom went to the doctor, she was told she had stage-IV breast cancer.

The following Christmas came around and it was the first holiday without her mom and Uriell said it was the most difficult to endure.

“It was the hardest thing to wake up on Christmas day because she bought us presents and my dad had to go get them and bring them to us,” Uriell said. “It was hard going through holidays after that point. It was never the same, and it’s still not the same.”

She also recalled her freshman year of high school, taking on tasks that would have involved her mom.

“For prom you typically would go to the store with your mom and ask, ‘How does this one look?’ or ‘How about these shoes,’ and I didn’t have that experience,” Uriell said. “I had that lost feeling.”

After her mom died, Uriell’s love of golf provided an outlet during times of hardship. She would chip golf balls at either The Crossing at Carlsbad or the Aviara Golf Club, both located in her hometown of Carlsbad, Cali.

“It was hard being in the house most days,” Uriell said. “It was hard on my dad. He was depressed and didn’t want to do anything. It would be easier to go to the golf course and hit or work on something that wasn’t just me sitting in my room or sleeping.”

Her persistence and dedication to her craft carried her to her life as a Razorback, and since then, she has proven she was worthy of that late attention.

In her 2017 fall season, she was ranked tenth in the nation with a individual stroke average of 69.97 throughout the NCAA women's division I players, not far behind the nation’s leading average of 68.74, according to Golfstat.com. She was also an All-SEC Second Team selection.

As Uriell is in her last season of her collegiate golf experience, her teammates and Razorback coach Shauna Taylor helped her through the pain of her mother’s passing, she said.

“She doesn’t just focus on great golf, she focuses on developing you as a person, and I really needed that after my mom died,” Uriell said. “She was good guidance for me. We [the team] have a culture that is really open, and we talk to each other a lot and have really good chemistry. Embrace everyone’s individual personalities and where you come from.”

Junior teammate Cara Gorlei said she has seen Uriell transition into womanhood before her eyes.

“Alana, over the past few months, has grown so much,” Gorlei said. “She has expressed strength and leadership and is starting to find herself. Her mindset is so strong. It's a trait we all admire.”

Senior Jordy LaBarbera has spent four years with Uriell in the program, and has also seen her develop into a strong woman.

“I have known Alana for four years,” LaBarbera said. “When she came in I could tell she was unsure about being here.”

Uriell distanced herself from her teammates and was skeptical of Coach Taylor’s instruction but as time went on, Alana began to be more open and compassionate toward the team, LaBarbera said.

“I know that she is the one caring for her family since her mom isn't there anymore, and from this experience she has become better in all facets of her life,” LaBarbera said. “She is a completely different person now than she was when she arrived at the UofA, and I am happy that I was able to be by her side along the way."

As time has gone on, Uriell has become even more thankful for her mother's love when she was on earth, she said.

Uriell played in the Lady Puerto Lady Classic. Feb. 11-13 and dedicated her play to her mom. The tournament came during an emotional time of the year for the golfer, as her mother’s birthday was Feb. 13.

“I miss her, and I wish that I was more grateful of her presence when I was a kid,” Uriell said. “She sacrificed a lot for me, and I hope she is proud of me. Go call your mom, and tell her how much you love her.”