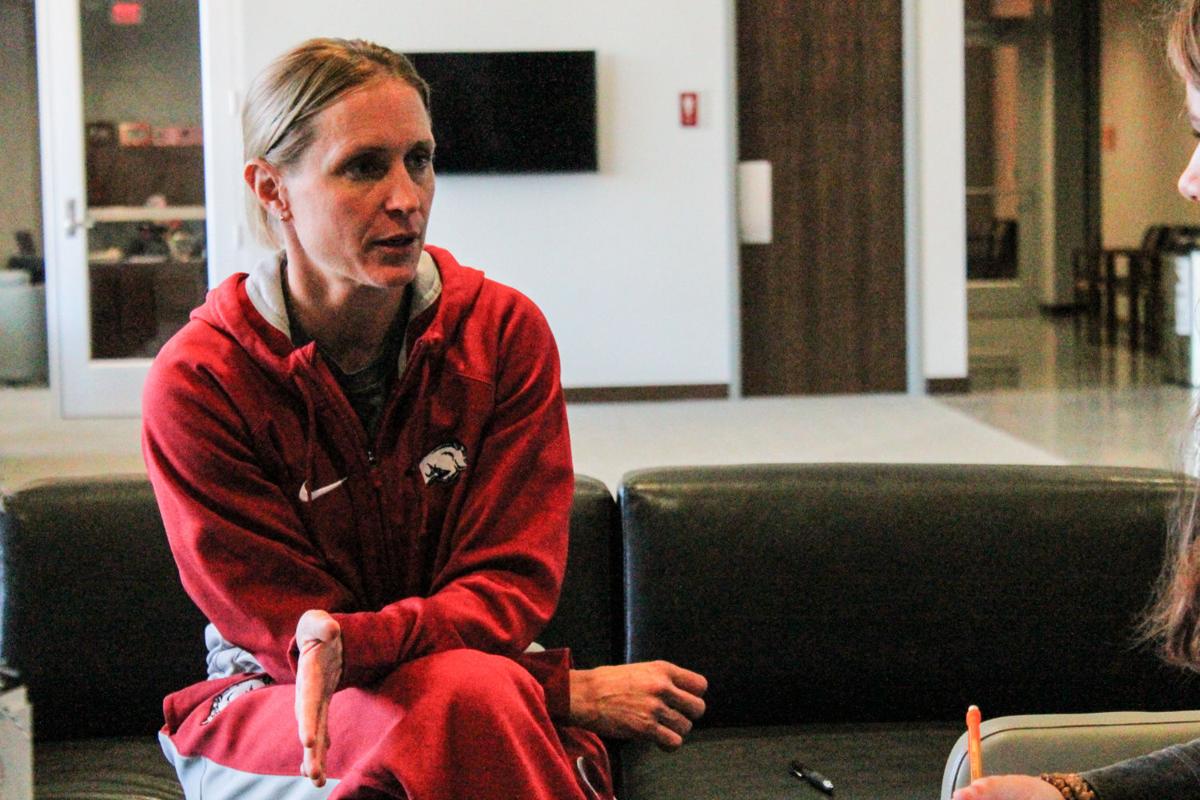 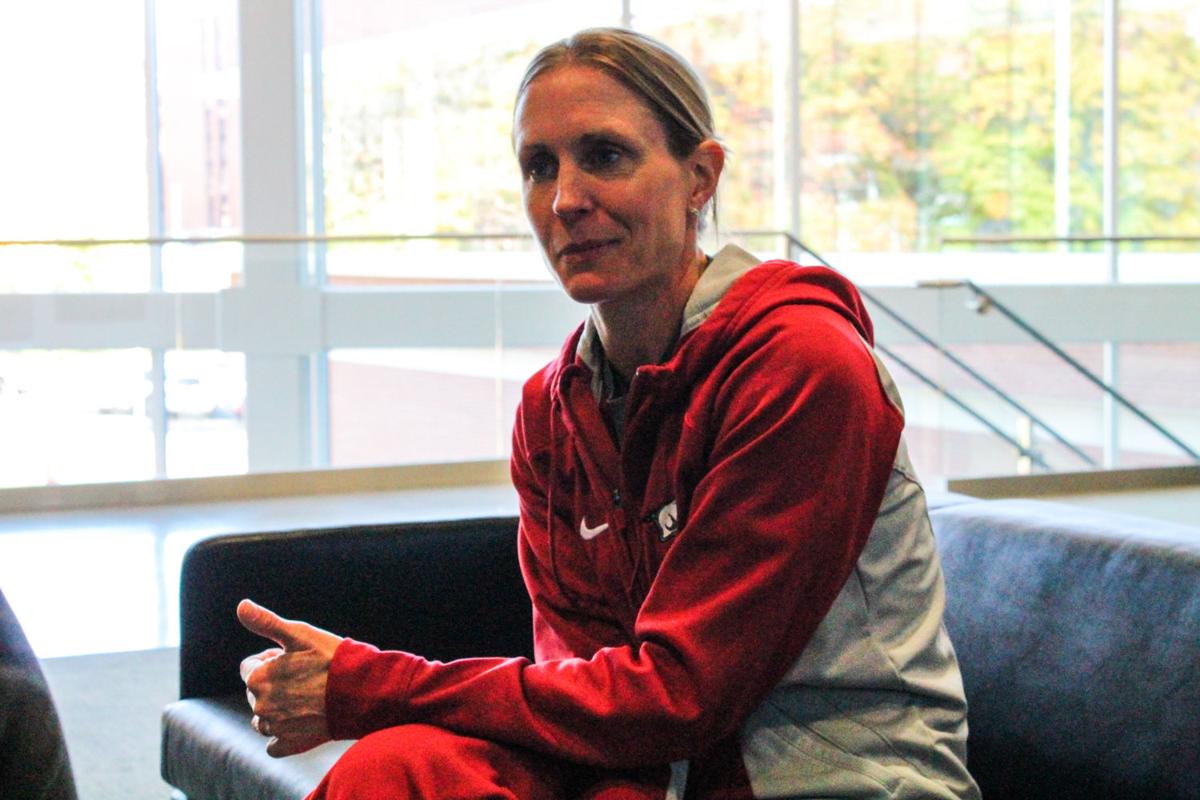 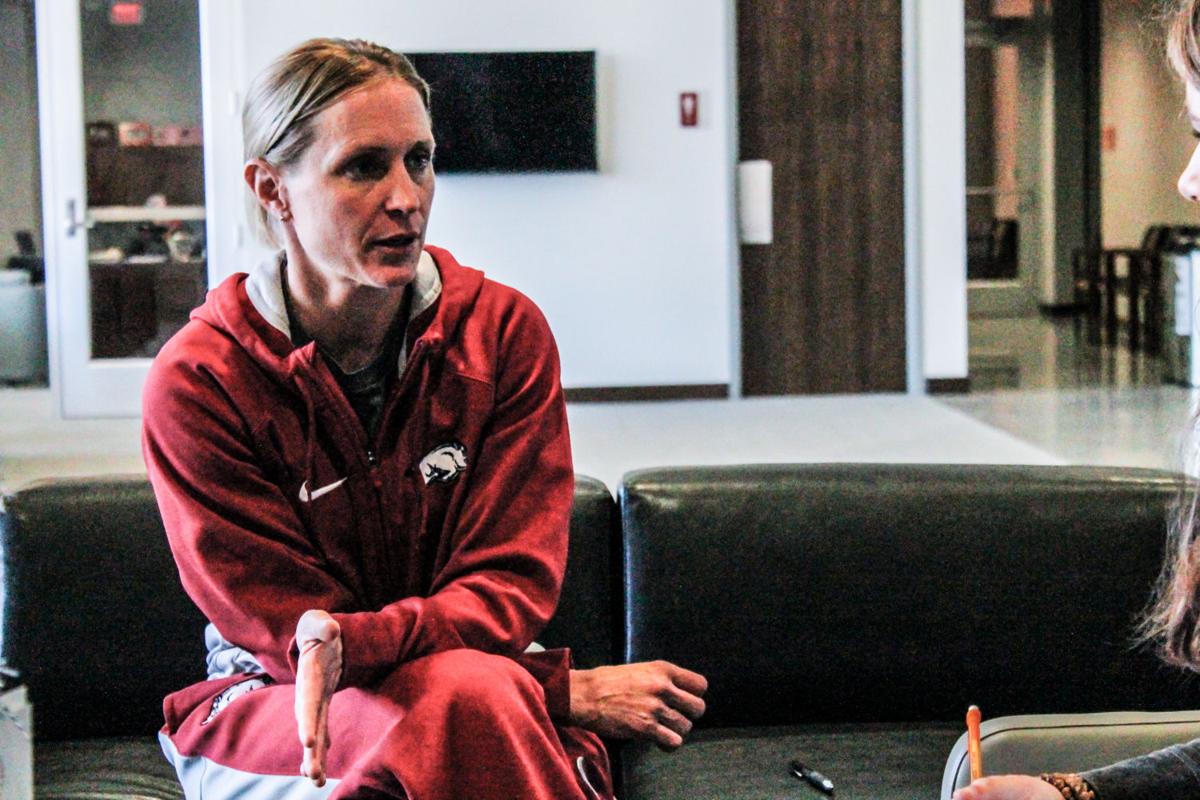 A lot had changed on campus since she graduated from the UofA in 1998, with the city growing and buildings going up around campus, Smith said. One thing she said that has not changed is the Arkansas fan support.

“When I came, I didn’t know much about the history of Arkansas,” Smith said. “The fan support at Arkansas just got bigger and bigger.”

Smith, 40, grew up in West Lafayette, Indiana, outside of Purdue. She began her undergraduate degree in kinesiology at the UofA in 1994.

“She was an extremely hard worker,” Shirey said. “She brought that work ethic every day and set the tone every day for her teammates. No one outworked Christy. Her teammates fed off that.”

The Razorback women’s team went to the NCAA twice when Smith was in college, as a freshman and a senior. During one of the years the Razorbacks were overlooked, they were one of the teams on national television waiting to hear if they’d made it into the tournament. It was embarrassing, knowing that she was on national TV waiting to get picked, only to be overlooked, Smith said.

Her senior year was a different story. The 1998 UA women’s basketball team not only made it into the NCAA tournament, they made it to the Final Four.

“One thing that helped us is we had a little edge,” Smith said. “Each game, all the commentators picked the other team to win. I think we all had a chip on our shoulder.”

The team lost their Final Four game to Tennessee, an undefeated team that went on to win the NCAA tournament, according to the Tennessee women’s basketball records. The game was in Kansas City, and Smith said a lot of fans drove up for the match to support the team.

After Smith graduated in 1998, she was the second round pick for the WNBA team the Charlotte Sting, the number 17 draft overall. Her time in a professional league was much different than her time at Arkansas, Smith said. Unlike the close-knit team she found in Fayetteville, Smith said she found it hard to connect with her teammates in the pros, who were often 10 years older than her.

However, the best thing about being in the WNBA, Smith said, was getting to travel to and play on the professional arenas where she watched NBA games growing up.

After Smith’s time in the WNBA, she returned to the UofA to get a master’s degree in biomechanics. Originally, Smith wanted to go into strength and conditioning training, but after five years she missed basketball. She coached at high schools in Texas and Indiana before she got a job as an assistant coach at Valparaiso University in 2008. Smith stayed at Valparaiso for three seasons before getting a job at Purdue, where she said she intended to stay.

“I had a pretty good set up,” Smith said. “I was close to my family, my parents.”

Smith said she met Jimmy Dykes, the current Arkansas women’s basketball coach, when he was commentating at one of Purdue’s NCAA matches. When Dykes got the job a few weeks later, Smith said she texted him to congratulate him and he asked her if she would be interested in an assistant coach position.

“Coach Dykes knew her, had met her, and knew he wanted to talk to her,” Shirey said.

Smith’s role as an assistant coach involves recruiting, working with the guards and giving her input to improve the team.

“I think she relates really well with the players,” Shirey said. “She’s been there, done that … When she speaks they listen.”

In her time at Arkansas, Smith said she wants to see the Razorback women’s basketball team built up into one of the top teams in the SEC and the nation, with the fan base to match.

“Any time you put a good product on the floor, people will come out and support it,” Smith said.